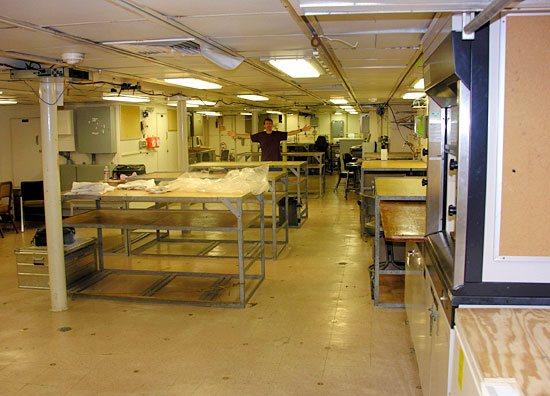 How to build a seagoing lab in two days in Yokohama, Japan. That’s the challenge facing the crew of the R/V Revelle and their home Institution at Scripps, and 30 scientists from around the world as we readied for departure from Yokohama a few days ago. The preparations and shipments began many months ago. Not even considering the fuel, food and ship’s supplies, VERTIGO scientists had plenty of equipment and supplies to get to Japan. Crates from New Zealand, pallets of science gear from Hobart, Australia, 3 huge wooden boxes with gear from Belgium, 4 containers weighing in at 10,000 pounds each left behind in Hawaii after last years VERTIGO cruise, another new container packed in Woods Hole and a mobile lab van from Scripps Institution of Oceanography, along with numerous boxes and packages flown in from the 10 labs participating needed to be shipped, unpacked and set up on the ship in just 2 days. 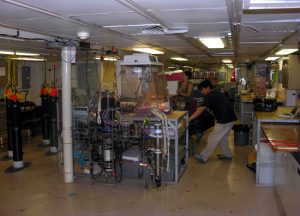 As you might imagine, it’s no easy job to coordinate delivery of hazardous chemicals used by many of the chemists on board, fixatives for microscopy, and liquid nitrogen delivery for flash freezing of biological samples (that one took arranging a delivery and payment of over $1200 US cash at the docks with a Yokohama gas company).

It also means that not everything you so carefully planned, arrives, or arrives in one piece. There was never a dull movement, and many anxious ones, when we learned for example that two of the containers owned by Jim Bishop’s group scheduled to leave in June, were stranded in Hawaii, with only one week to go. Options included renting an entire 747 airplane for a custom flight to Japan for over $340,000. That option was a bit too pricey for this science program, and was solved by Jim flying to Hawaii with not even days to spare, to unload and send as two air shipments express to Japan- sort of like asking FedEx to deliver 25,000 pounds of packages overnight!

Well, the good news is that last of Bishop’s equipment showed up at midnight the day before we left Yokohama! The bad news is that the day before we were scheduled to depart, yet another major research item, the MOCNESS, a large net system used to capture marine zooplankton at depth was lost on its way from Fiji, via Auckland and Singapore to Japan. What to do? Well, fortunately for VERTIGO, we had organized our activities around a Japanese time series effort at “K2” a site in the northwest Pacific. Because of this we had made many contacts within Japan, many of whom joined the VERTIGO scientists for a one day conference on Monday, July 18th, in Yokohama. Our hosts that day included Dr. Makio Honda and his colleagues from JAMSTEC who organized the event and a great reception for us all after a tour of the R/V Revelle that evening. Little did we know when we made our toasts to stronger international ties that evening, that two days later we’d be testing these ties by asking to borrow a $140,000 MOCNESS sampling net, with no notice. The short story is that within 24 hours, with help from Minotu Kitamura, Dhugal Lindsay and permission from JAMSTEC Director Kato Yasuhiro, we were quickly trained and then had delivered on our day of departure a Japanese IONESS system that essentially has the same characterisicts as the MOCNESS, only the software to operate it is in Japanese. Thankfully, we have Toru Kobari on board from Kagoshima University who is a zooplankton expert to help us translate and run IONESS on the R/V Revelle.

We were all greatly relieved and extremely tired, when we set sail and looked back on Yokohama as we departed on the evening of July 21st. All the gear is tied down and secure, and VERTIGO is a go. 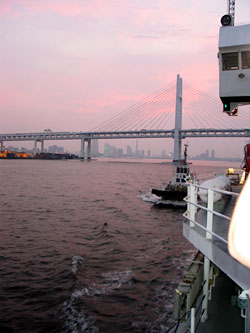 Yokohama in distance as pilot boat leaves R/V Revelle on the evening of July 21st. (Photo by Mark Gall).