Are All Traps Created Equal?

This collaborative project took sediment and particle trap equipment to sea on the North Atlantic Porcupine Abyssal Plain in April 2017 to help understand the biological and ecological processes that allow the ocean to sequester carbon. Cafe Thorium was invited on this final cruise of a 4-year project that began in 2013.

There is considerable need to understand these processes that through net primary production fix dissolved CO2 into organic matter in the upper ocean. As well, we hope to understand the processes that then transport this organic carbon into the deeper ocean. It is ultimately this deep organic carbon transport and sequestration that defines the impact of ocean biota on climate by affecting atmospheric CO2 levels.

The biological pump is what we call the processes that create organic carbon in the euphotic (lit) zone (EZ) followed by the export and attenuation of these particles in the underlying twilight zone (TZ; starting approx. 1000 m depth). More on this topic can be found elsewhere on this website.

We hope to quantify the pathways of ocean carbon export and flux attenuation however the problem remains that we have no absolute measure of ocean carbon fluxes. This project therefore hopes to: 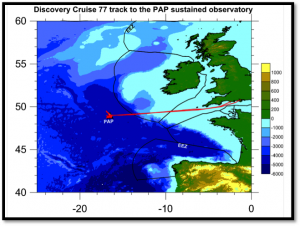 The Porcupine Abyssal Plain (PAP) Observatory is a sustained, multidisciplinary observatory in the North Atlantic coordinated by the National Oceanography Centre, Southhampton (UK). This areas has provided time-series data sets for over 20 years to analyse the effect of climate change on the open ocean and deep-sea ecosystems. PAP is located 600 km southwest of Ireland.

How it will Work

NBSTs consist of four cylindrical sediment trap tubes (collection area = 0.0113 m2) and a 0.25 m pathlength transmissometer arranged around a central profiling float. Traps are programmed to sink to a predetermined depth, drift while collecting sediment particles, close the trap lid then rise to the surface for recovery. Recovery aids consist of CPS and flashing strobe light. The transmissometer operates as an "optical sediment trap" and measures attenuance flux as a function of time, which is a proxy for sinking particulate carbon flux.

The NBSTs were set up with three tubes each containing a poisoned brine in the base overlain by filtered sea water. A forth tube contained a polyacrylamide gel in place of the brine to collect particles for microscopic imaging. The NBSTs were programmed to sample at depths of 200 m and 350 m. More information about this technology and development can be found HERE.

Alongside the NBSTs a cylindrical sediment trap tethered to a float was deployed with collection tubes similar to those described above but designed by collaborator C. Lamborg. These too contained brine or gel with seawater overlying. Two arrays were attached to the tether to drift at 200 m and 350 m depth. A Nortek ADCP current meter was also deployed on the STT just below the 350 m trap tubes.

Thorium-234 profiles were located around the projected drift track at intervals throughout two deployments of NBSTs and STT. Four litre samples were collected from the CTD/Rosett for the analysis of 234Th at sea. The method entails collection of a 4L sample, adding stable Th yield monito and pH adjustmens resulting in the formation of an Mn precipitate that scavenges Th. This precipitate is then filtered onto a 25 mm diameter quartz filter. The filter is dried, mounted and beta counted at sea using a Riso counter. A total of 161 samples were collected. See "A Primer on 234Th in the Ocean" for more information about this method.

McLane in-situ battery powered pumps were deployed for the collection of size fractionated particles. These pumps, clamped to a line, are lowered to specific depths where the pumps are triggered to begin. The water is pushed first through a 51 micron screen followed by a nominal 1 micron quartz filter. Filters are both 142 mm and a baffled opening developed for the GEOTRACES program keeps particles from washing off the top of the screen during retrieval and ascent. Pumps are programmed with a delay to allow them to reach depth prior to pumping. They then run for 2 hours after which they are retrieved. Volume is measured by dual flow meters. Originally developed at WHOI and now a private company, more information regarding McLane pumps can be found here.
Back on the ship the screen filter is rinsed onto a 25 mm silver filter which is dried and counted for 234Th. The larger quartz filter is subsampled as well (25mm punch), dried and counted for 234Th. Weighed sections of the quartz filter will also be used for carbon-nitrogen (CHN) and particulate inorganic carbon (PIC). The silver filter is analyzed for silica which can obviously not occur using a quartz filter.

Data from this Cruise

Photos from this expedition can be found HERE

This work was funded under the National Science Foundation grant number 1659995.

This is a joint project with: 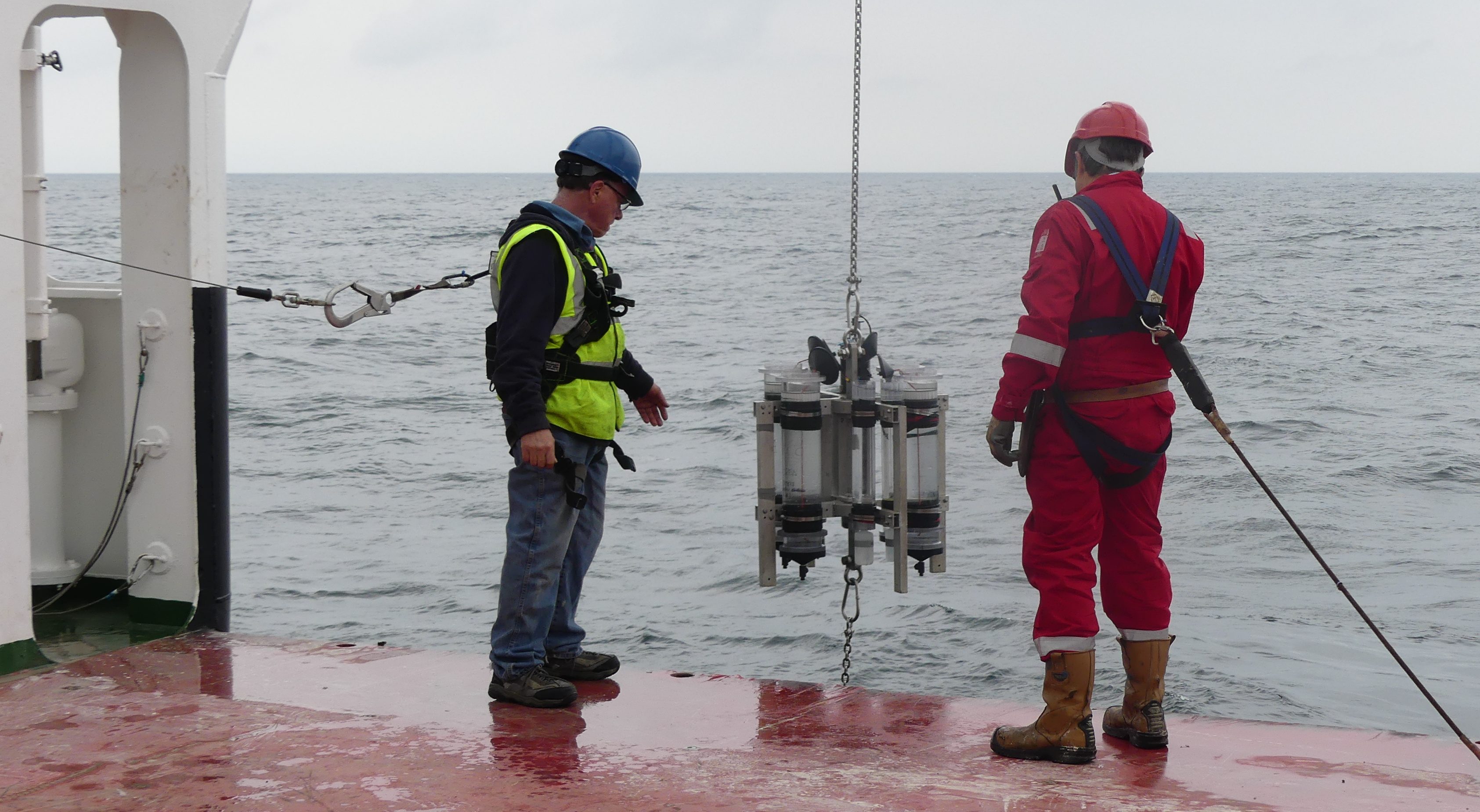 Steve Pike (left) deploying the Surface Tether Trap (STT) over the side. 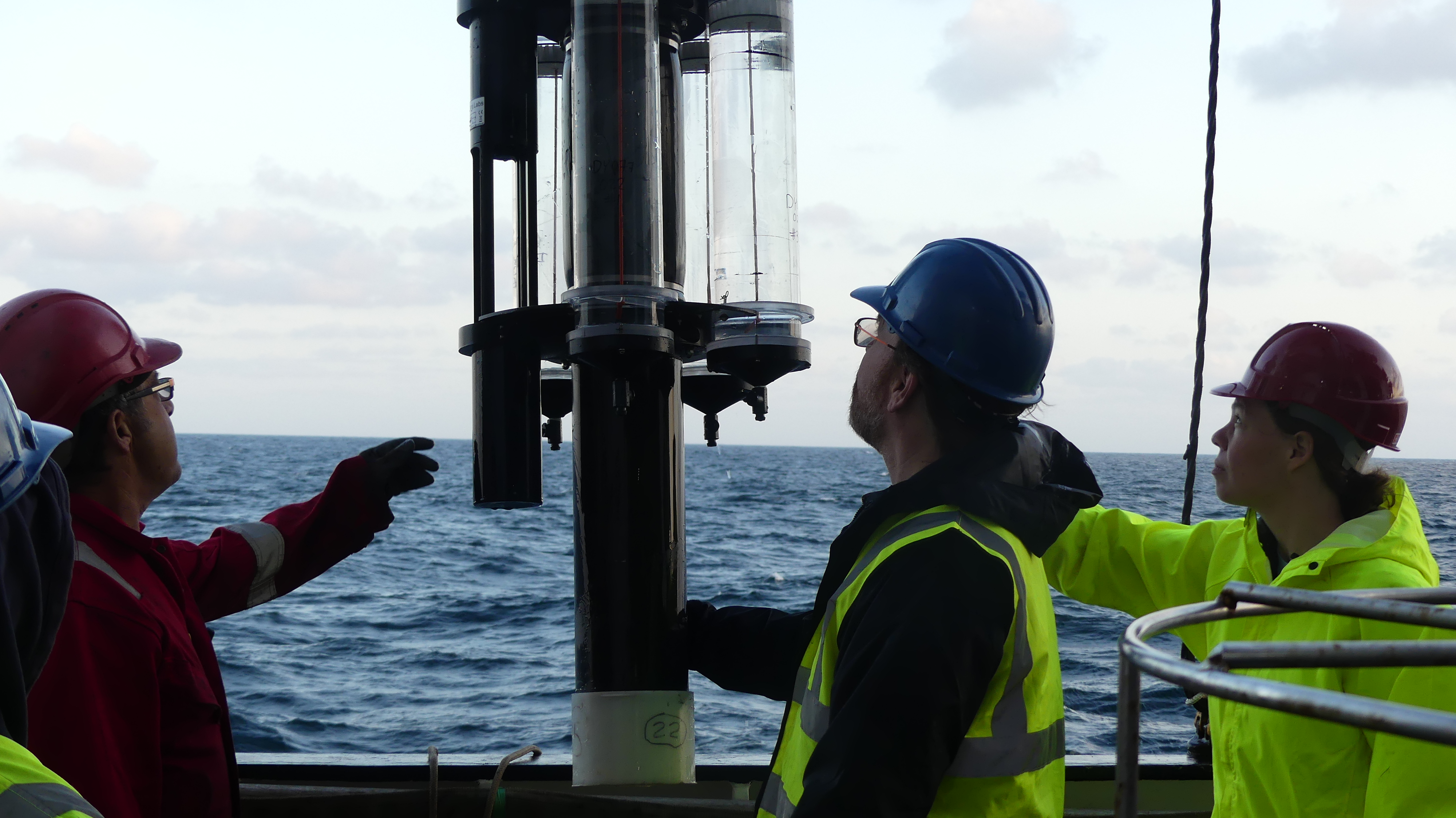 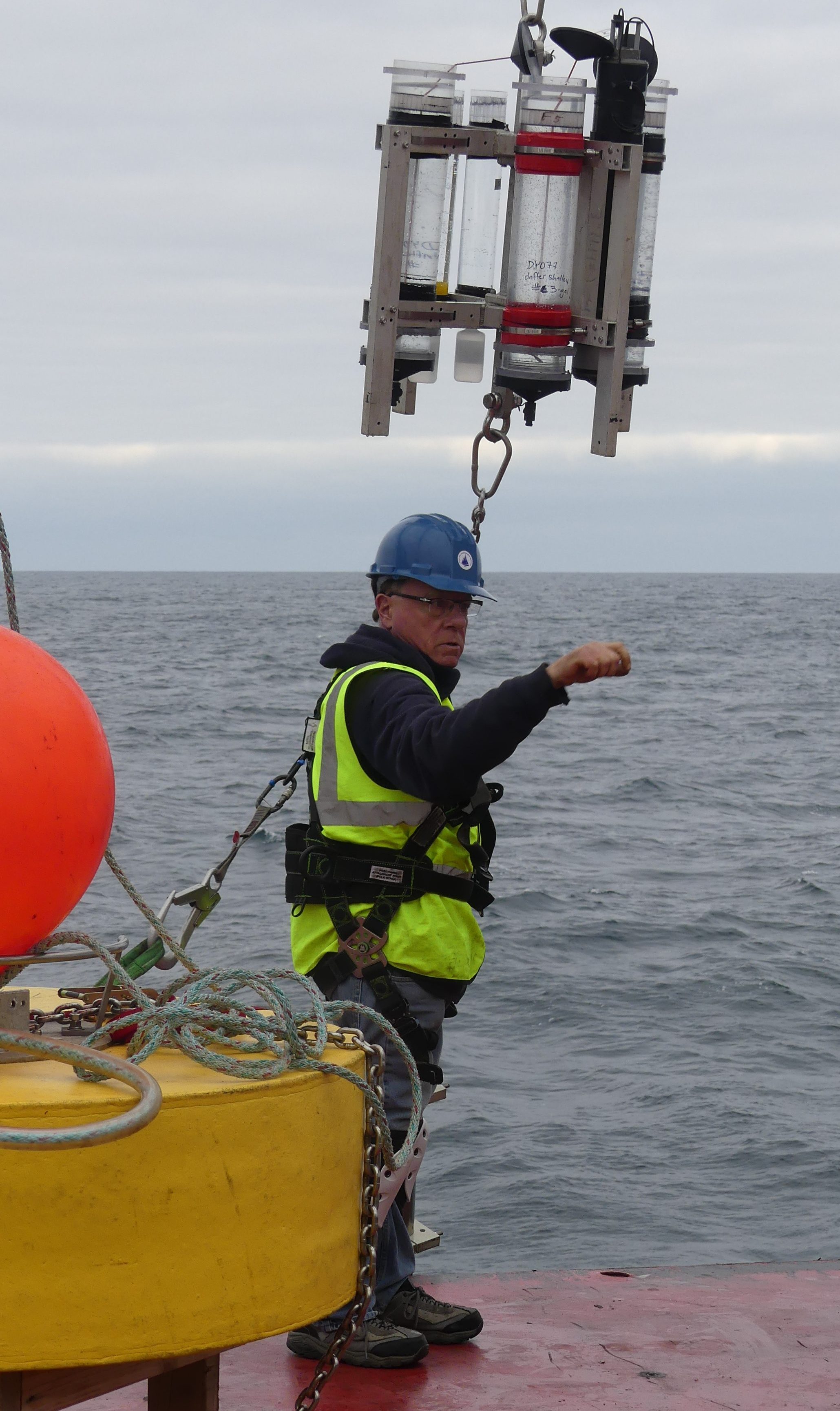