This project sets out to develop improved particle flux collectors and use these to answer key science questions associated with C fluxes and exchange via sinking particles at the Bermuda Atlantic Time-series Study (BATS) site. Currently at BATS, we can’t balance surface ocean C budgets, annual new production estimates, or link production and community structure to predict particle export, and regularly fail to capture episodic flux events. At the same time, we are trying to answer these questions using an imperfect tool, the drifting sediment trap, a device that has served us well but has not changed significantly since the early 1980s. 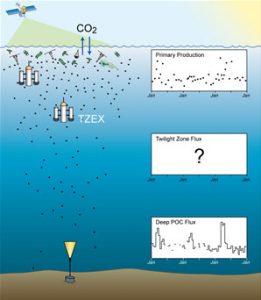 This program is both innovative and ambitious, with the development and engineering of new tools and its emphasis on the collection of multi-annual time-series data, while being realistic in starting from proven technology. We start by building upon our recent success with the neutrally buoyant sediment trap (NBST), but recognize that continuous flux collection and swimmer free samples are needed, as envisioned for our new design- the Twilight Zone EXplorer (TZEX).

Download our NSF Carbon and Water proposal entitled "Carbon Flux through the Twilight Zone- New Tools to Measure Change". Note that funding was cut significantly, so the project is now a 4 (vs. 5) year effort and the "Stage 4" one week process cruises have been cut. 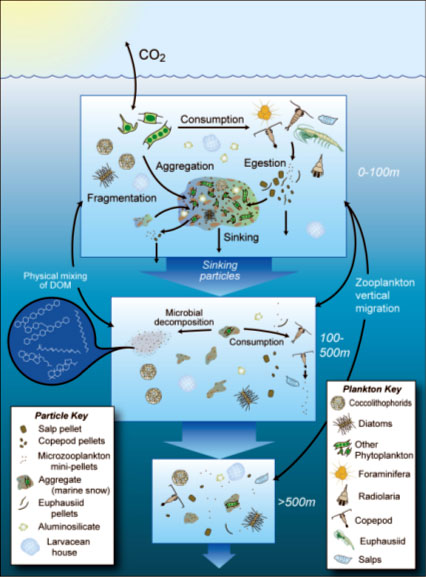 The biological pump is a process regulating the flux of particles in the ocean. Carbon dioxide fixed during photosynthesis by phytoplankton in the upper ocean can be transferred below the surface mixed layer via three major processes:
i) passive sinking of particles
ii) physical mixing of particulate and dissolved organic matter (DOM)
iii) active transport by zooplankton vertical migration
The sinking flux includes senescent phytoplankton, zooplankton fecal pellets, molts and mucous feeding-webs (e.g., larvacean houses) and aggregates of these materials. The sinking particle flux decreases with depth as aggregates are fragmented into smaller, non-sinking particles, decomposed by bacteria, and consumed and respired by zooplankton. This remineralization returns carbon and nutrients to dissolved forms. The structure of the planktonic community affects the composition and the sinking rates of particles. Particle size, form, density, and the content of biogenic minerals affect sinking and remineralization rates.

Building upon the success of our VERTIGO project, we continue to work to improve our understanding of how materials travel from the surface to the deep ocean. This pathway is called the "Biological Pump" (see above) which refers to the combined activities that lead to a quick pathway for plant and animal debris (molts, fecal pellets, loose aggregated material) to sink as marine "snow" or a particle into the deep ocean (see figure).

Example of changes in fecal pellets from sediment traps at 3 depths in the subarctic North Pacific (K2). Not the primarily cylindrical copepod pellets at 150m, the red, carniore-produced pellets at 300m, and the large, ellipsoid larvacean pellets at 500m. (Wilson, Steinberg & Buesseler, 2008)

In the open ocean, this cycle is largely a biological one, though in some settings, transport of material delivered by dust may matter (see our previous TENATSO - Cape Verde time series project).

The "twilight zone" is a region of low light below the ocean's sunlit surface "euphotic" zone, and above the deep ocean boundary (around 1000m or 3000 feet). It is in this mysterious layer where most of the sinking particles of the world's ocean are consumed by the animals that live at depth.

In this project which stated in late 2006 we designed an autonomous vehicle called the "Twilight Zone EXplorer" (TZEX) (see figure) to sample the ocean particle flux and make remote measurements in the twilight zone. Beginning in 2007, we will be starting to sample on a monthly basis at Bermuda, as part of the BATS (Bermuda Atlantic Time-Series) program using our existing particle flux collectors, the Neutrally Buoyant Sediment trap (see figure). 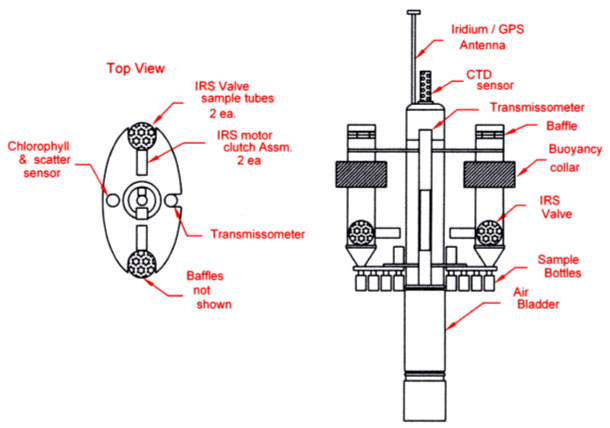 The Twilight Zone
An interview with Ken Buesseler on Episode 5 of Nature Publishing Group's Simply Science, part of Scitable: A Collaborative Learning Space for Science.

A Journey to the Ocean's Twilight Zone (pdf)(Oceanus Magazine 2006, 45:2)
A conversation with marine biogeochemist Ken Buesseler: A torrent of particles rains down through the ocean's dimly lit regions, providing food for organisms below and sequestering some heat-trapping carbon dioxide from the atmosphere. A WHOI biogeochemist investigates what makes it into the ocean's twilight zone and what makes it out.

Swimming in the Rain (pdf) (Oceanus Magazine 2006, 45:2).
Novel untethered vehicle catches 'marine snow' falling through the sea: At first, critics said it shouldn't be done. Then they wondered whether it could be done. Finally, WHOI scientists and engineers built an innovative device to capture a fundamental but still mysterious ocean phenomenon.

All data from this project can be found here: https://www.bco-dmo.org/project/2076