These are the words we’ve been longing to say as we worked for over two years to reach this point of departure out of Honolulu on the R/VKilo Moana with 27 scientists and almost as many crew members on board. It took us only two days to load thousands of pounds of scientific gear to set up our new home and seagoing research lab. These loading days are hectic, with piles of gear arriving in boxes, crates and large steel containers from our home Institutions in Australia, Belgium, New Zealand and across the US from Virginia, California and Cape Cod, Massachusetts. Its hard to imagine a 1600 pound FedEx shipment, but that’s only one of the last minute details we had to arrange to get a delayed series of 3 huge crates from Antwerp Belgium out of US customs and on a plane to Honolulu to arrive the morning before we departed. And its not only the scientists that are busy, but the whole dock is full of ships support teams, who are fixing broken equipment, loading supplies and fuel, exchanging crew members, etc. Funny, how after all of the long and hot days working dock side, the only pictures I could find are calm shots looking back on Honolulu from the upper decks of the Kilo Moana as we departed at 0800 hours. A few last cell phone calls on the morning of Father’s Day, June 20th were made as we headed out of the harbor on this early Sunday morning. 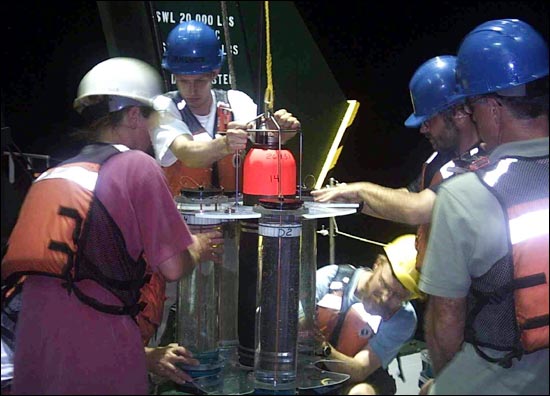 On many research cruises to the open seas, it can take many days of travel before one reaches the first sampling station. We are not so lucky in a way on VERTIGO, as our site lies much closer, and we have little time to set up our equipment. Our destination is only about a hundred miles north of Oahu at a site known as “station Aloha” where the oceanographers for over 15 years have conducted a regular time series sampling program known as “HOT” for the Hawaiian Ocean Time series. We are choosing this site, since with the wealth of existing data in hand, we can put our specialized study of the ocean particle cycle in context of the seasonal cycle of upper ocean currents, biology and changing chemical signatures. Part of this experiment is tracking particles in the ocean that sink at rates of 100 meters per day, or about 300 feet per day and measuring changes in their chemical properties. These particles originate in the surface as tiny marine plants and animals, or plankton, live and die forming a “biological pump” that leads to sinking particles that carry organic carbon and other associated materials to depth. Think of falling leaves or snow (one term for the slowly settling large particles is marine snow). These particles carry for example carbon to the deep ocean and thus impact the climate cycle as greenhouse carbon dioxide levels in the air are in part controlled by the strength of this biological pump.

So with little time to set up the labs, the pace quickens and we collect our first water samples from a test station, after getting a briefing from the Captain on safety and being called to a fire and boat drill in our life preservers. It’s easy to get hurt with so much heavy gear being lifted in and out of the water on the rolling, so safety is always on our mind when we work long hours in these tough conditions. A quick dinner, with a nice round of Happy Birthday to Karen Casciotti, a young scientist from Woods Hole (sorry no pictures, but a flower lei and birthday cake did make the event more festive). Our evening ends with a 90 minute science meeting where we had our first real chance to explain in more detail to each other, what our plans were, what gear was working, what we needed to do to be ready, and how we might help others as we steamed in to station.

This station takes place only 12 hours after we left port, and marks an important point in VERTIGO as we deployed our first Neutrally Buoyant Sediment Trap (NBST). The NBST is a unique device that is programmed on a mission to sink to depth, collect sinking particles (think of a rain gauge in the ocean), and then close up and return to the surface and send its location via satellite back to the ship. The whole difficulty of studying sinking particles is catching them! There are very few to start with in this part of the world’s ocean, and they sink very slowly relative to the movement of the ocean currents that carry them 100 or more times farther laterally than they sink vertically. So, now think of a rain gauge in a hurricane, and the NBST is a gauge that can fly with the hurricane, collecting particles as it floats below. The depth to which the device sinks, is tied to its buoyancy in water which it can control to some degree. However a miscalculation in its weight by as little as a few small coins (we use washers for trimming ballast), can make the difference between a successful mission or bobbing at the surface, or worst of all, sinking to the abyss. As the NBST crew knocks on wood and share a few nervous jokes about when they will see the NBST again, it sinks slowly into the now black waters of the Pacific night. The NBST team settles in for some sleep and now the all night CTD team is ready for more water sampling as we attempt to survey our site and learn about variability in ocean properties that might be tied to the types of particles and how fast and how deep they sink.
We are on our way. Go, go VERTIGO!