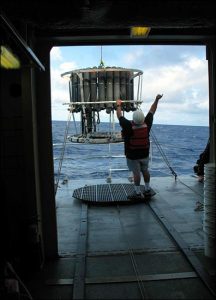 In the early morning hours several scientists and crew members gather on the upper deck, peering out into the sea, still dark. They’re looking for a needle in a haystack. Well, actually they’re looking for the antenna of the second Neutrally Buoyant Sediment Trap (NBST) deployed on this leg of VERTIGO. The 24-inch antenna is often the only part of the trap that is visible above the surface as swell washes over the rest of the instrument. This morning, we’re also looking for a small strobe light mounted on top of the trap that may still be visible in the early morning light.

At 05:00 the first transmission was received from the trap, telling us it was at the surface, and at 06:00 we have the first sighting! Carefully steaming towards the small flashing light the captain eases us into position as Ken Buesseler (Chief Scientist, WHOI) and Jim Valdez (WHOI) ready the recovery lines. At 06:30 we have a successful recovery of the trap. Two for two, not bad so far!

In the past 36 hours, we’ve also completed 17 casts with the CTD rosette, mapping temperature, salinity, dissolved oxygen, chlorophyll fluorescence in a grid of stations surrounding the central deployment site at station ALOHA. These casts have identified some interesting features in the fluorescence profile, with several distinct layers of relatively high chlorophyll fluorescence in the upper 150 meters. We have collected water from these layers using the rosette of Niskin bottles mounted around the CTD. Microscopic examination of samples by Mary Silver (UCSC) and Sara Tanner (UCSC) has revealed a dense layer of diatoms and cyanobacteria, small single-celled photosynthesizers, centered at a depth of 40 meters. Mary calls it the “cob web zone” because many of the cyanobacterial and diatom cells appear to be caught in stringy webs or tubes. Many of the cells showing up in their samples are potential nitrogen-fixing organisms, including the now well-known filamentous tufts of Trichodesmium, often seen at station ALOHA. Vivid images of these tiny organisms that thrive in this low nutrient (oligotrophic) environment have peaked the curiosity of everyone who has looked through their microscope. 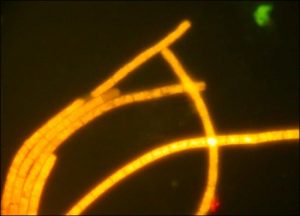 Today, more instruments will go in the water for test dunks. The MOCNESS is a complex net system that opens and closes 10 different nets while being towed behind the ship. This enables collection of plankton at specific depths without contamination from deeper or shallower levels. This contraption has been set up by the group from VIMS (Joe Cope, Stephanie Wilson, and Rob Condon) and will be deployed for a few hours to fish for small and large zooplankton, alike. Also to be tested today is the MULVFS, the multiple unit large volume filtration system, engineered by Jim Bishop (LBNL) for in situ pumping of up to 20 cubic meters of water through a series of filters. When deployed later, it will provide samples for intensive analysis of particle composition in different size classes at 12 depths. Stay tuned for details with ongoing experiments and other new developments…