Mary Silver (University of California, Santa Cruz) and her collaborator Sara Tanner (Moss Landing Marine Lab) are on board the Research Vessel Kilo Moana collecting water samples and using microscopes to probe the mysteries of the marine particle cycle as part of their contribution to VERTIGO. Here is Mary’s report from June 23rd. 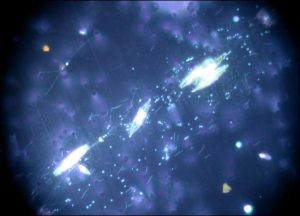 One of our most surprising discoveries was the finding of clumps or “aggregates” of relatively large floating algae (phytoplankton) in this amazingly blue and otherwise clear oceanic water. As we lowered sensors down to 500 m in our first water profiles on the cruise, we noticed that our device for measuring fluorescence, which detects the concentration of plant pigment (chlorophyll) in the water, showed very large and erratic spikes starting just below the surface. These spikes were striking, showing much higher concentrations of pigments than concentrations found in the main chlorophyll maximum layer below. (The “deep chlorophyll maximum” is a feature found throughout much of the open ocean where the low light levels can barely support phytoplankton growth). We recognized that our sensor was measuring chlorophyll in a very small volume of water, possibly indicating that clumps of phytoplankton were passing through the detector’s light beam. These spiky features occurred in the “mixed layer” a region down to 60 m, where water is supposedly well mixed and phytoplankton populations relatively uniformly dispersed. The spikes continued irregularly to the base of the mixed layer, becoming smaller as the sensor entered the cooler waters of the thermocline As our sensor returned to the surface, we “popped” one of our sampling bottles at 40 m depth, hoping to catch the unknown organisms that caused these puzzling spikes in our detector. 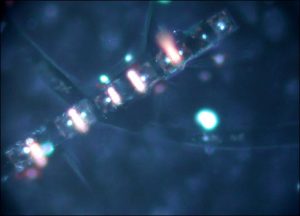 Chain of the colonial diatom Chaetoceros with filaments of cyanobacteria attached to their silica shells, from 40 m. (Photo by Sara Tanner)

The sources of the spikes soon became evident. There were some of the “usual suspects”, the occasional filaments of Trichodesmium, a cyanobacterium (“bluegreen alga”), well known in these waters for its role in nitrogen fixation, a process that delivers usable forms of nitrogen to ocean food webs otherwise deleted in this key nutrient. But most striking were millimeter and longer strands of mucus-like filaments, containing oriented cells of diatoms, together with accompanying populations of large bacteria. Additionally there were intimate associations of different types of photosynthetic cells – small filaments of other types of cyanobacteria on and inside colonial diatoms, and yet other mucus structures with dense clumps of 2-4 species of diatoms. The cells were healthy and intact, showing evidence of recent cell division. The fluorescence of the healthy cells and their abundance suggested to us that these aggregates were the sources of our mysterious electronic pigment spikes. But, even more perplexing was the reason for the existence of these structures, which might well appear as a zone of mucus cobwebs, could we view them directly in the water. We have some possible explanations, but our incoming samples and ongoing microscopic work in the next few days hopefully will help us sort the truly unlikely from the not-too-crazy hypotheses we have built to explain these amazing phytoplankton aggregates that float below the surface ocean.