After an eventful and anxious few days at port in steamy Yokohama, we were relieved to finally get to sea, with all our equipment and people on board. Now, a nice relaxing 4 day transit to the cooler climes of the western subarctic gyre during which we could finish unpacking, chat with colleagues and plan our experiments. But wait, what’s this? The captain says we’re heading into a little bit of weather? Then Ken showed us this picture of the projected track of Typhoon Banyan. It is predicted to practically meet us at K2 on our arrival! So much for a perfectly relaxing transit. The analogy to what we are doing in the North Atlantic, is to travel from Cape Hatteras to the Grand Banks, at the peak of hurricane season with a storm in the Tropics forecasted to head towards Newfoundland. 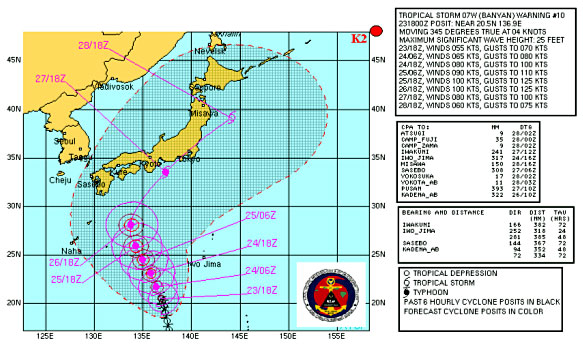 Storm tracking map, showing progress of Typhoon “Banyan” and VERTIGO K2 sampling site just off map in upper right corner where on July 29th the first drifting sediment traps are scheduled to be deployed in to what might be quit stormy seas.

Typhoon is the name given to large tropical cyclones that form in the western Pacific or China Sea, and just like hurricanes, they have high winds, drenching rains and a distinct “eye.” This last feature is the main character that distinguishes tropical cyclones from extratropical storms…such as the “noreasters” so common to the east coast of the U.S. Typhoons often follow paths like those of hurricanes as well. As they form in the warm waters of the tropics, where easterly winds prevail but move north into the westerly wind belt. This means storm tracks up the Chinese and Japanese coastlines, towards are site are common. They are just as unpredictable as hurricanes, so the chances of this storm really meeting us at our site are not really high. But the ride is getting a little bumpy today, the clouds have lowered and it’s raining. Being at our site for about a month means we’ll likely have to keep our eyes on other systems, and indeed, another has formed, farther to the south of Japan, but is currently not predicated to come our way.

Not to worry, friends. The Revelle is a large and sturdy ship with an excellent captain and crew. Though we are heaving around a bit today, the ride is quite smooth, with none of the sudden lurching around that can knock you off your feet and throw all your equipment off a lab bench.