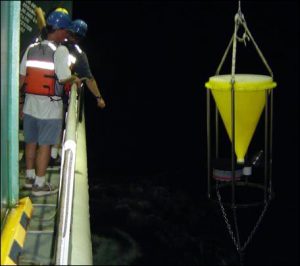 The primary goal of VERTIGO is to measure and understand the controls on sinking particles as they enter the twilight zone from the well-lit, surface ocean. To do this, a wide variety of tools and platforms have been deployed. Some of these are arrays of tubes or large cones designed to collect sinking particles from surface tethered or neutrally buoyant platforms. Others look at the characteristics of the sinking particles either optically or by their degradation over time. Yet others are deployed to assess the currents that push particles horizontally as they sink (hopefully into one of our sediment trap collectors). Below is a is a picture of Tom Trull’s conical sediment trap array being deployed during VERTIGO. This sediment trap has a series of cups which collect a time series of the flux of sinking particles.

As of today, we have deployed 18 platforms in a 20 km box just north of the island of Oahu. It would be far too difficult (and expensive) to moor all of these instruments to the bottom of the ocean (its more than 15,000 feet deep here!). All of the devices deployed during VERTIGO are pushed around by the currents of the ocean as well as by the winds (if they poke out from the ocean). The hard part is that we have to go get these things back if we are to make any measurements and at this site ocean currents are fairly swift (as much as 1 knot) and change rapidly (often reversing direction within one day). Some of our measurements need to be collected and analyzed quickly which adds another level of complexity to this problem. Finally while these traps are sampling ocean particles, we have many other measurements to make.

The good news is that all of these objects send out radio beacons that relay their location to orbiting satellites which then produce emails to the ship saying where each measurement platform is. This is where the VERTIGO Air-Traffic control Team (VATT) comes in. Dave Siegel and Erik Fields of UC Santa Barbara are collecting these emails and attempting to keep track of where all of these drifting objects are. Erik has developed a program that takes the email fixes as well as the ship’s location to make a simple Geographical Information System (or GIS) to keep track of where each object is and how far they are from the ship. Visual fixes from observers on the ship are also used in updating a drifting objects location. The result of this is a map of the locations of objects and the ship (see link below). The real job of the VATT will come shortly when its time to pull these drifting arrays out of the ocean and do science with them. We are hoping that this tool will help us accomplish the VERTIGO mission. 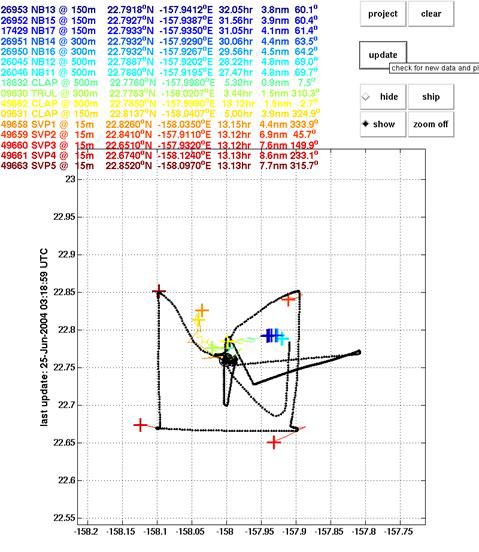