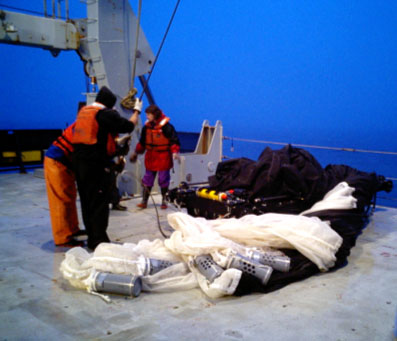 IONESS on deck of R/V Revelle prior to first test deployment. Nets are black and white and end in a bucket (grey cylinder) where the zooplankton are collected. (Photo by Toru Kobari)

Last year we used the MOCNESS (Multiple Opening and Closing Net Environmental Sampling System) on board the R/V Kilo Moana to sample zooplankton at discrete depths. This year, due to an unfortunate shipping mishap with the MOCNESS, we were lucky enough to borrow the Japanese IONESS (Intelligent Operated Net Environmental Sampling System) instead thanks to some very generous scientists at JAMSTEC (Japanese Agency for Marine-Earth Science and Technology) in Yokohama, Japan. Zooplankton ecologists Deborah Steinberg, Joe Cope, Tori Kobari, and Stephanie Wilson are onboard the R/V Roger Revelle to observe the zooplankton community and biomass of the subarctic Pacific Ocean. We will use this data along with the data from the first VERTIGO cruise to understand how zooplankton modify sinking particles in different environments within the ocean’s surface and mesopelagic zones.

Both nets work on the same principle in that they are able to sample at multiple depths during a single deployment. IONESS is a newer design, bigger, sturdier, and heavier than the MOCNESS. IONESS has 7 nets and the MOCNESS has 10. We therefore will deploy the IONESS twice to get our required number of sampling depths. The IONESS nets are longer, and are black at the mouth or “fishing end” and white at the lower collection end. The black is so zooplankton will not see the net coming and swim away from it, and the white section allows scientists to see and make sure all the zooplankton entering the net wind up in the cod-end buckets which collect and concentrate the captured zooplankton. The biggest difference so far that we have encountered is that the instruction manual and computer software used to remotely trigger the nets at the correct epths is in Japanese! Thank goodness we have a guest zooplankton ecologist, Toru Kobari, onboard who, along with conducting research on copepod community structure, is helping the American net operator, Joe Cope, translate and successfully deploy the IONESS.

We had our very first test run of deploying, triggering the nets, and recovering the IONESS a few days ago and we are happy to report that most everything worked well and we had a successful deployment! Joe operated the software from the safety of the comupter lab on board the ship. He says it is somewhat similar to the english version. He has learned the japanese characters required to trigger the nets as well as the symbols for depth, speed, >and net angle. There were some very happy zooplankton ecologists onboard when the net came back up with its cod-end buckets filled with lots of weird and wonderful zooplankton of the subarctic Pacific Ocean!