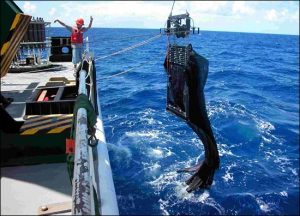 One of the many tools used on board the RV Kilo Moana during this cruise is the MOCNESS zooplankton net. MOCNESS stands for Multiple Opening and Closing Net Environmental Sampling System. This net is used to collect tiny zooplankton species in discrete depths from the surface of the ocean to, in this case, 1000m. This can all be done in one long tow because the MOCNESS consists of 10 separate nets that are able to open and close at the touch of a computer key. Scientists Joe Cope, Rob Condon, and Stephanie Wilson (all at the Virginia Institute of Marine Sciences) have the task of using this net to look at changes in zooplankton biomass with depth as well as the differences in the day and night as many tiny ocean dwellers migrate to deeper waters (down to 800m) during the day to avoid being eaten by predators that can see them at the surface during the day. Imagine having to walk 25 kms to breakfast each day! 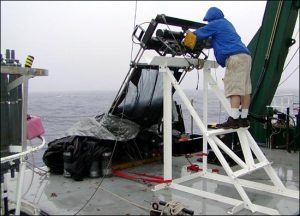 Our lab is interested in the role of the surface zooplankton community composition in affecting the flux of materials through the mesopelagic zone of the ocean. The mesopelagic zone is the depth range of the ocean where light meets constant darkness, and is also known as the ‘twilight zone’. We are also going to looking at zooplankton food web dynamics and some metabolic processes occurring at these depths. These processes are important in understanding the global carbon cycle. Our first deployment was a big success. All of the nets opened at their correct depths and we did not loose any of the buckets called “cod ends” that are used to contain the plankton once it goes through the net. The entire tow lasts four hours starting with Joe controlling the angle of the net, the speed the wire goes out, and the depths in which the nets are opened and closed. Joe knows this system so well, that he was able to spot problems in the net, take it apart and then put it back together again all in one day!

Once the nets are out of the water, it takes another 4 hours to process the animals that get caught. We have to divide the animals out by size for each net and then save them to look at species composition, their weights and carbon content. All in all, each cast takes about 8-9 hours to complete. As you can imagine, if you want to look at both day and night biomass, you have to be up for over 24 hours! We do two tows in one day, one close to midnight and another close to noon.