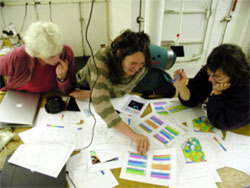 Our VERTIGO cruise is focused on “K2” a Japanese time series site in the NW Pacific where we expect to find unusually high particle fluxes. So while it is quite simple to tell the Captain to steam to “K2” at 47 degrees North 160 degrees East, conditions at this site can vary on small scales, and one of the early tasks of our cruise was to survey a larger area around K2 and find where conditions would be most ideal for our studies. We took 3 days to do this sampling over a 2 by 2 degree area (120 x 120 miles) around K2. We collected data using underway surface seawater sensors and by dunking the CTD rosette water sampler to 1000 meters at 13 points on the grid and collecting sensor data and samples for on-board microscopic work and later chemical analyses. 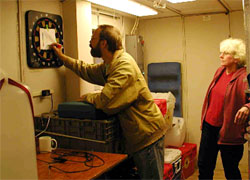 We had many criteria to consider in site selection. We were under strict guidelines to stay at least one mile off the actual K2 site, where the Japanese have almost $1M worth of equipment hanging on a mooring line where they return every 6-12 months to collect data, samples and turn around equipment. We actually have drawn a 5 mile “no fly zone” around the exact mooring position, and are very cautious to make certain that our free drifting sediment traps don’t drift along and snag the mooring which rises to within 30 meters of the surface (about 100 feet). Our drifting traps meanwhile are floating around hanging on wires down to 150, 300 and 500m, so we want to be close, but not too close.

Complicating matters, our drifting and neutrally buoyant sediment traps will travel anywhere from 10-50 miles during a 3-5 day deployment, which brings us to our second major concern, namely the dierction and intensity of surface and subsurface ocean currents. Erik Fields is on board from UCSB tracking ocean currents using on board ADCP (Acoustic Doppler Current Profiler) and satellite images of ocean altimetry (sea level height), and his models predict currents varying in direction over 360 degrees and ranging from near zero to velocities of greater than 25 km (10 miles) per day. We were looking for a site with current velocities (5-10km per day heading in a direction away from K2). 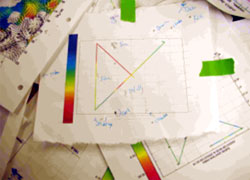 Finally, we came to K2 seeking higher particle fluxes, so part of the effort in the survey was led by Mary Silver and her colleague Sarah Smith who looked under a microscope and identified the large plankton species that were captured in the sample bottles to identify prospective “hot spots” of biological activity. In this region, a class of plankton called “diatoms” which have silica shells are quite abundant and thought to be responsible for considerable particle flux in this area.

So, after 3 days, the VERTIGO team had already collected a vast array of chemical, biological and physical data. After some discussion, we quickly focused on an area about 1 degree east of K2. There were other areas of equally high diatom biomass and chloroplyll, but this area had low currents heading away from K2 and abundant large diatoms. A short 12 hour trap deployment with our neutrally buoyant sediment traps confirmed that aggregates of these diatoms and many zooplankton fecal pellets formed a significant fraction of the sinking flux in the region.

To finalize our decision, we had a little fun and played a short game of darts & yes, both scientific evidence and hits on the dart board suggested that we had found our X on the map! We are now ready to start the larger VERTIGO experiment.