A simple lesson in hydrostatic pressure

Water is much heavier than air (actually about 1000 times heavier). This is a simple fact we all take for granted. It is obviously true; if it weren’t rain would fall up and the ocean would be the atmosphere (but this is a silly digression). The weight of a column of water above a diver or an instrument provides a pressure that squeezes the air from the diver’s lungs and attempts to crush our instrument casts. In fact, the weight of just a 10 meter thick slice of ocean is equivalent to the weight of the entire atmosphere. This principle of increases of pressure due to the weight of water above you is called hydrostatic pressure. The deeper you go into the ocean the greater the hydrostatic pressure. At 5000 m depth, the pressure will be about 500 times the atmospheric pressure. 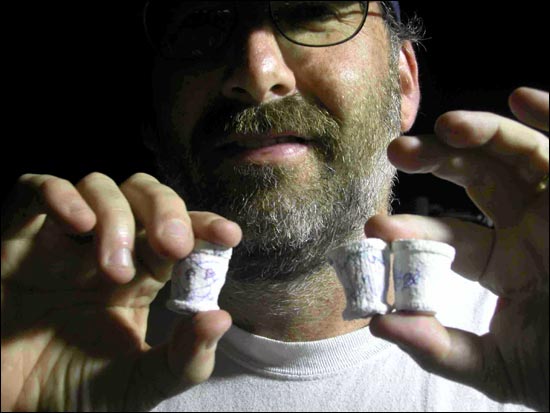 A practical demonstration of hydrostatic pressure is the crushing of Styrofoam cups on a deep cast. Styrofoam material can be thought of as a plastic netting filled with air. If we squeeze it with our hands, we can squeeze out the air and making the netting tighter resulting in little balls of plastic. If we were to lower the cups during a cast to great depths within the ocean we would be subjecting the cups to a huge amount of hydrostatic pressure. This squeezing by hydrostatic pressure is equivalent to the squeezing we can do with our hands. On cast 25 of VERTIGO, we did a cast to 3000 meters to sample deep concentrations of Thorium-234 and dissolved Barium. On this cast, we tied a bag with pre-drawn Styrofoam cups. The cups shrank from about 4 inches high to just over one inch!!! The hydrostatic pressure at this depth squeezed the Styrofoam cup into a much smaller form, though very similar in shape. All the cups squeezed to the same size (even though there is no hole in them; OK, Gus??). This clearly shows that hydrostatic pressure has immense power and one must carefully build instruments to study the deep ocean.

The author would like to thank Gus, Alida and Karina for their artistry on their cups and R/V Kilo Moana crewmember Lawson Worrell for sharing his vast knowledge of crushing cups.