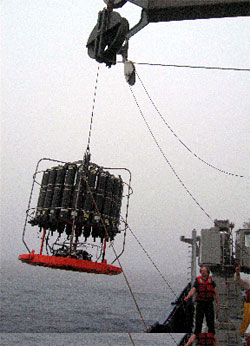 We dip this ‘big tea-bag’ several times every day to 1000m (about 2/3 of a mile) to get a ‘profile’ of measurements of ocean stratification. In this picture the CTD is below the ‘rosette’ of Niskin bottles which we can close at different depths to get water samples from the ocean interior. (Photo by Tilla Roy)

We are holding position here in the far northwest Pacific (47°N, 160°E) under a white dome of sky. Little moves on the sea outside – a feather drifts by from a disappointed gull. She’s unimpressed with our fishing abilities. But below all sorts of things are a-fin.

How do we know? Our most important tool is the CTD – the Conductivity-Temperature-Depth recorder, and has been for the past century.

Lab experiments over many years have provided a relation between conductivity (measured most simply by sending electrical current between electrodes) and salinity, so from this device we get the information we need to calculate the density of seawater. This lets us examine “stratification” of the ocean – in other words its separation into layers that resist mixing with each other. And this Sub-Arctic North Pacific region of the global ocean exhibits very strong stratification.

Our friendly gull floats happily and hopefully in water that has warmed to more than 11°C (~53°F), but not far below her feet the temperature drops quickly to just above freezing (2°C or ~36°F). This cold water formed the previous winter as icy winds from Siberia sucked heat from the ocean surface. Spring and summer have warmed the waters above it, and melting sea-ice to the north and west has also added fresh water which reduces the salinity. This fresh and warm summer water is less dense than the cold and salty winter water below it, and the two do not mix easily – it takes work to do the mixing to lift the dense water towards the surface and push the light water down, and the winds are too weak to do much work here in summer. This is a strong contrast with Sub-Antarctic waters which are familiar to our Tasmanian team of scientists – where summer mixed layers are commonly 75m or more in contrast to less than 20m here. 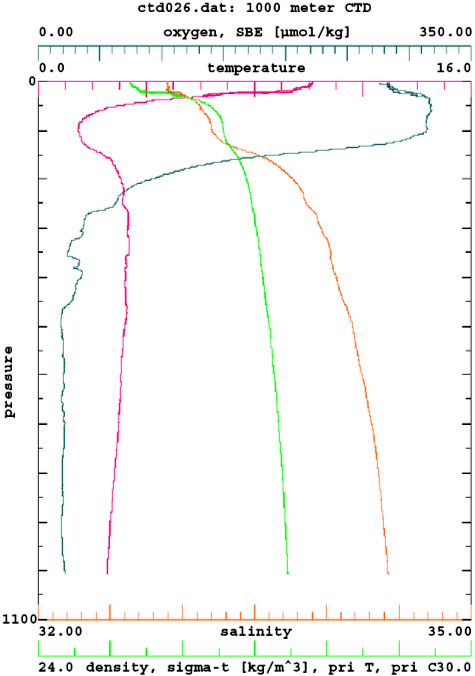 Note the rapid drop in temperature from the surface to the cold waters near 100m depth left over from last winter. Stratification is indicated by sigma-t (the density of seawater in units of kg/m3 * 1000 , e.g. 1.026 kg/m3 or g/cm3 is written as 26).

This near surface stratification is a key aspect of the environmental conditions that influence phytoplankton production and the overall structure of the regional ocean ecosystem. In later installments of this little note on ‘What Lies Below’ we will describe some of these influences, as well as other measurements also made by the CTD. But that will have to wait for another day…… its time to get ready to recover our first free-drifting sediment trap! 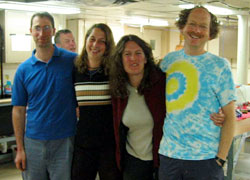