Tom Trull and his colleagues Lisette Robertson and Clodagh Curran from University of Hobart in Tasmania Australia came quite a distance to be part of VERTIGO. They are studying the composion of ocean particles that they catch using a variety of sampling methods. Here they report on their first look at what they have caught in the bottom of a “gel trap”. 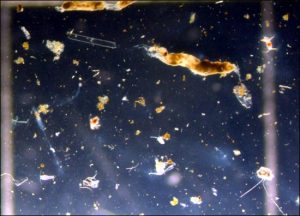 Caught in a viscous goo, unable to swim out, ahhhhrrgh – these small animals swam into our traps and were caught along with sinking detritus in a clear “gel” we put in some traps. At the lower right is a copepod (white with long white “antennae”). An “amphipod”, a small shrimp like creature is visible above it, next to the tube-worm like “larvacean”. To give an idea of their size, the photo is 13mm (1/2 inch) wide. For our chemical analyses we remove these animals using screens, but they are nonetheless an important of the story – as a source of some sinking particles in the form of their faeces, and in consuming other sinking material. Also in the picture is a very large “diatom” ( the rectangular outline) near the top left – one of the rarer large single-celled plants (known as phytoplankton) that form the base of the foodweb in the sea. This one is large enough to sink, but most of the phytoplankton here are much smaller. As we recover the traps from deeper depths in the days ahead we expect the number of animals to drop off with depth, and the size of the particles to generally decrease as well – because at every depth something eats or disrupts this flux of sinking material.