VERTIGO is spending a considerable effort, stalking marine particles that are sinking out of the surface ocean to the deep sea. We capture them by placing open tubes at different depths to form a “sediment trap”, analogous to a rain gauge on land. This is the easiest way to explain a collection process that is much more complex in the oceans.

Our sediment traps are faced with a very difficult job. Marine particles, which are basically the by products of the surface plankton (their fecal pellets, dead cells, molts, aggregates of cells and associated bacteria) sink much more slowly than the ocean currents move them around. As they sink, they become food for the smallest microorganisms as well as the larger zooplankton that we catch in the IONESS zooplankton tows. Capturing these sinking particles in a moving system and without chemical or biological alteration is not an easy task.

We are at a point in this cruise when the first sediment traps are being retrieved, so the excitement is building. Some of our traps, fondly called the “CLAP” trap, since they have a closing mechanism that claps shut after a fixed time, are hanging on a wire from a surface float. Satellite GPS systems tell us their exact location relative to the ship (see map). Still, deploying and retrieving these systems takes careful planning and deck work to safely and successfully bring these back (see photo).

While we know their exact positions (assuming the links between trap, satellite, shore and ship are all working), even more challenging this year has been the almost continuous fog that is present here. During the evening hours when we have found it is usually easier to spot a flasher on the trap than spot them during day light, visibility has ranged form only the length of the ship to less than 1/2 mile. So, for the CLAP traps, that means approaching very slowly & keeping a careful eye on the latest GPS readings, radar (which only works on these small buoys on calmer days) and spotting them with binoculars from the bridge. For the NBST (Neutrally Buoyant Sediment Trap), the challenge is even greater, as the target is so small, that there is no radar signal and the GPS readings, while precise, are often 30-60 minutes out of date by the time we reach them.

This brings us back to our title “hunting for marine particles”, since the NBSTs are a free vehicle that sink to depth, collect particles in their tubes, clap shut, and return to the surface to send a GPS signal and turn on a small light to guide us to them. The problem still is that lifting them out of the water means hunting them down and catching on to a 15 foot length of floating nylon line as we move slowly closer to them on the R/V Revelle. Needless to say, it takes a skilled Captain and crew to get us even close to the NBSTs.

Step two is where fishing and archery come to play. Jim Valdes is master of the 30 foot “fishing” poll which has a line and hook on the end that he uses to snag the pick up line. Meanwhile, for longer catches, I’ve adapted for this particular set of NBST pick up’s, a small crossbow to shoot out an arrow equipped with a hook and attached to a bow fishing reel with 100 pound line- the William Tell approach (see photo).

Tonight will be our 3rd night of trap retrieval. So far, all of our gear has come back from their missions, and both polls and cross bow have proven successful in snagging the lines. All eyes are on these valuable samples, and we are pleased to be seeing an abundance of sinking material in these traps. So, the hunt for marine particles is starting out well! 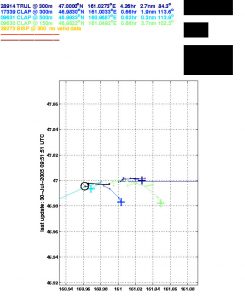 Figure 1. Map showing relative position of the ship (center of black circle, and its track indicated by black line) and four of the surface buoys below which hang different types of sediment traps (crosses at end are last known position, colored lines connect prior buoy positions). Our starting position was near 47 N 161 E (Y axis is latitude decimal degrees North and X axis is longitude decimal degrees East). 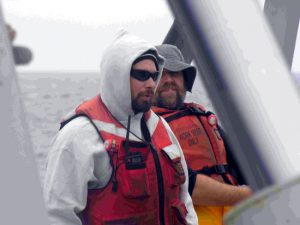 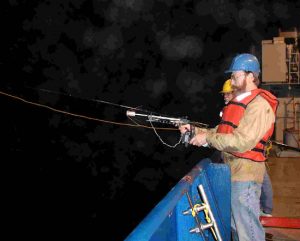