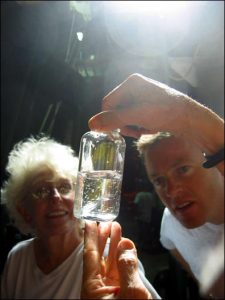 at heteropod in jar. (Photo by Carl Lamborg)

Typically, when we think about gelatinous animals we think of jellyfish, like the sea nettle, which sting sea bathers or clog fishing nets. Yet these organisms, collectively known as ‘gelatinous zooplankton’, can play an important role in many ecosystems including the open ocean.

On the VERTIGO cruises, our group (comprising of Joe Cope, Steph Wilson and Rob Condon from the Virginia Institute of Marine Sciences) is in part investigating ways in which zooplankton package particles and control rates at which particles sink through the water column. This is an important process in the open ocean when we consider big-picture global processes like the carbon cycle because zooplankton may be able to speed up the efficiency of the “biological pump” (basically the shunting of large amounts of carbon to deep waters), for example, by forming fast sinking fecal pellets (see image below). The ‘jellies’ are voracious predators on the tiny crustacean plankton, like copepods, and have larger fecal pellets and so the presence of jellies in large numbers may have an important role in particle formation.

Gelatinous zooplankton are common and diverse in form coming in many unusual shapes and sizes. It certainly pays to be gelatinous and transparent in the open sea particularly when there is nowhere to hide from your predators, like fish! So far on this cruise, using the MOCNESS and other plankton nets as collection tools, we have been fortunate to observe many interesting and delicate species of jellies of which we know very little about. These include the ctenophores or comb jellies (‘ktenos’ is latin for comb) that have eight rows of fused macrocilia called comb rows that are used in swimming. The image below is of a Beroe ctenophore which is interesting because it makes its living eating other jellies!

Other animals we have observed or collected include some large, red deep-sea jellyfish the size of a football called Periphylla, pelagic snails called heteropods that have an ‘elephant trunk-like’ snout, tiny gelatinous squids, and unusual critters called salps which look like small gelatinous tubes. Closely related to other chordates, the salps are of particular interest to us because not only are they adapted to surviving in environments where food is scarce but they can also form really large particles that can sink at a rate of two thirds of a mile per day (see image below)! By further observing these animals in the lab we hope to learn more about the ecological role these fascinating critters play in these systems. 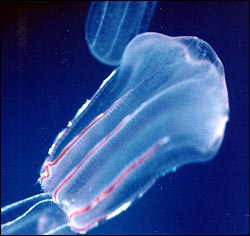 Beroe image. Animal is about 5 cms in length. (Photo by Rob Condon) 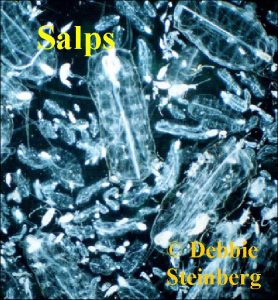 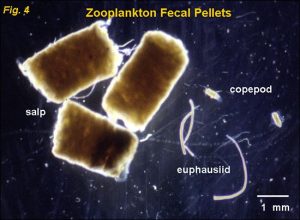