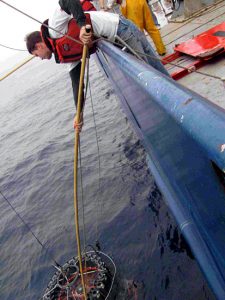 Damien Kunz using a long pole to attach a tag line to the CTD as it comes on board the R/V Revelle during one of our calmest moments during our VERTIGO cruise. (Photo by Tilla Roy)

The words “We are out of points” was written on a small post-it left by the Captain on my laptop this morning. What this referred to was that we needed to update our daily schedule and sampling positions ASAP. We are just over half way through our time here at K2 , ready to launch a second round of sediment trap experiments, so the question of what’s next is on everyone’s mind.

What’s next is determined in part by what we have been observing over the last 3 days, as we were steaming along grid points chosen to provide a larger scale view of the chemical, biological and physical environment we are working in. During our second survey, we have used underway sensors to measure ocean temperature, salinity, fluorescence (an indication of phytoplankton biomass), light transmission (an indication of particle abundance), ocean currents and other parameters, plus we launched the CTD to collect water samples every 40 km (24 mile) in order to collect samples from below the surface.

As an example of the spatial structure here, you can see an indication of surface temperature variability over our last survey grid, with the warmest surface waters in the southeast. Fluorescence, or our phytoplankton Chlorophyll biomass indicators do not necessarily follow temperature out here, as many plankton do quite well in these frigid waters (see difference between Figures 1 and 2), and in fact are highest in abundance in the waters below the surface where they are living at temperature only a little above freezing (2°C; 36°F). 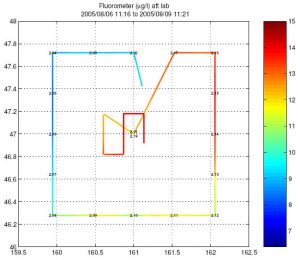 Surface water fluorescence along the same track (scale on right in relative units of fluorescence). 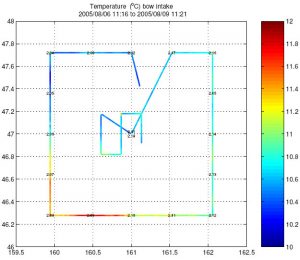 So do we stick with the same spot or move on? From VERTIGO’s perspective, our first location was ideal, we have decided to stay put for our second sediment trap experiment. We’ve encountered many large phytoplankton species that are characteristic of the region and large flux producers. In our traps (see photos) we’ve collected large samples of sinking material, much of which seems unaltered as it sinks rapidly between the depths of our shallowest trap at 150m down to 300 and 500m where other traps catch the flux below. We have the rare opportunity to follow the same high flux region in detail over this 2-3 week period, to look for changes in particle composition and flux as the season progresses. We are seeing changes in the surface ocean that should propagate downward to changes in flux at depth in our traps.

So, we start early with 12 different sediment traps going back in to the water tomorrow. We expect calm seas, so it’s a good day to launch our traps. We’ve had almost continuous clouds and lots of fog, but that’s typical for the region. We are happy the winds are low (hence the fog) and thus the seas as calm, and we hope for more of the same as VERTIGO continues to make new discoveries at these “points” on the map. 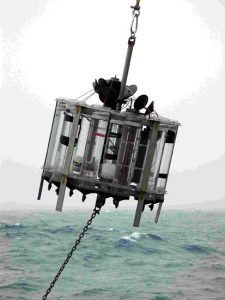 Close up of a CLAP trap, which is similar to the NBST in that it collects sinking particles in the clear tubes, but it is tethered on a line to a drifting surface float. This has the advantage of a larger carrying capacity for different trap experiments, but it’s flow through the water is not as ideal as the NBST, since the trap at depth is influenced by surface currents and motions on the mooring the line. (Photo by Mark Gall) 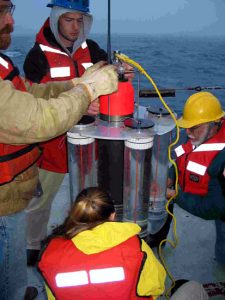 WHOI group working on a Neutrally Buoyant Sediment Trap (NBST)- a free vehicle that is sent on 3-5 day missions to depths of 150 to 500 meters (roughly 500-1500 feet) in the ocean where it collects sinking particles in the clear tubes that are mounted on the NBST. (Photo by Mark Gall).