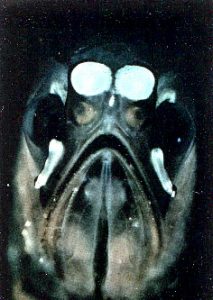 We concentrate our studies for this cruise on the mesopelagic zone, between about 100 and 1000 meters below the ocean surface. This zone of the ocean is cold (about 2°C here in the North Pacific), there is very little light- hence the nickname “twilight zone”, and phytoplankton (microscopic plants at the bottom of the food chain) cannot grow here. It is because of these inhospitable conditions that in the 19th century the “Azoic zone hypothesis” was put forward, reasoning that conditions are so unfavorable in the deep sea that there could be no life there. This was disproved at the turn of the century (~1900) when the deep trans-Atlantic cables were brought to the surface and found encrusted with organisms. Also, opening-closing plankton nets on early oceanographic expeditions showed life was present at all depths in the sea

We now know there is a whole fauna of organisms that call the twilight zone their home. But how do they make a living in this zone where no plants grow? What do they eat? What adaptations do deep-living zooplankton and fish have that enable them to survive, reproduce, and flourish in the twilight zone? Twilight zone zooplankton and fish can eat each other, migrate daily to the surface waters to feed on phytoplankton or zooplankton, or eat detritus (dead phytoplankton, feces of zooplankton, for example) sinking from the surface waters into the deep ocean. Our research group thinks that mesopelagic zooplankton and fish are very important in consuming the sinking detritus that rains from above, and we are studying this phenomenon on this VERTIGO cruise. Many deep-sea animals have specially enhanced vision to help them see their prey (or their predators!) or a mate in the low light. Fish tend to have very large eyes and pupils, or eyes that are upward looking so the silhouette of their prey can be seen against the slightly lighter surface waters. Some even have a “tapetum” in their eyes- an organ that reflects light and helps their vision (just like cats and other nocturnal animals have- this is what makes cat or raccoon eyes glow when your car headlights shine on them!).

Sergestid shrimp from the mesopelagic zone. (Photo by Debbie Steinberg)

Bioluminescence, the production of light in living organisms, is extremely common in the twilight zone. The same chemical reaction that makes fireflies light up on summer nights makes deep-sea creatures glow. Light is produced in special organs called photophores. Bioluminescence is used for many purposes: as a lure to catch prey (for example, Angler fish have a luminescent lure dangling in front of their mouth snout to attract prey), for vision (some fish and zooplankton have head lights), for species recognition (lantern fish or myctophids have species–specific photophore patterns), to startle, confuse, or warn a predator (some copepods put out a bioluminescent cloud to deter predators, and some medusae will shed luminescent tentacles as a distraction), or for camouflage (downward placed photophores can match the intensity and color of the down welling light, so an animal is camouflaged, avoiding being seen by a predator looking up at it from below). 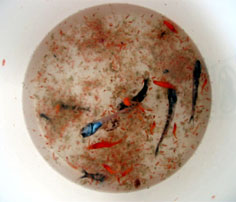 Looking down into a bucket containing mespelagic zooplankton and fish collected by the IONESS net. Note the black color of the fish and the red color of the shrimp. (Photo by Sarah Smith)

Twilight zone animals are often black (fish for example), good camouflage in the deep, dark waters, or red (found in many crustaceans) which looks black at depth because of the way light color spectrum changes as it penetrates deeper in the ocean. We see many black or red animals in the deeper nets from our IONESS tows on this cruise.

Another common adaptation for twilight zone organisms is a slow metabolic rate, which saves them valuable energy. These creatures breathe slower and grow slower compared to their surface-living counterparts, and often live longer too.

Thus, these strange and often spectacular deep-sea creatures have adaptations that make them well suited for the deep, dark, cold waters of the twilight zone. Almost makes you want to live there too- well, almost…