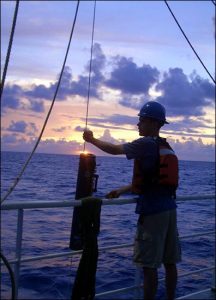 Frank Dehairs working over his lap top in the laboratory on the R/V Kilo Moana. (photo by Mark Gall)

Here’s a problem for you. How do you collect and study water from the ocean for iron, when you are surrounded by rust? By most laboratory standards, ships are dirty places, rusting, greasy, and bathed in diesel fumes. Stopping the rust is nearly impossible, as seawater is a perfect medium for accelerating corrosion of metallic objects. An example of the difficulties facing scientists interested in studying iron and other metals present in trace amounts in seawater is the CTD rosette on board the R/V Kilo Moana (and all other ships). The cable running from the rosette to the ship is steel and hangs over the sampling bottles, the rosette is aluminum with additional lead weighting and has a sacrificial zinc anode to discourage corrosion of the framework. This means a high potential for contamination of samples for iron, aluminum, zinc, cobalt, vanadium, molybdenum and other metals.

But why should we care about metal contamination of our samples? In addition to the important nutrient non-metal elements nitrogen and phosphorus, common in fertilizers, plants and animals everywhere (including humans; look at your vitamin bottle) need small amounts of some nutritive metals such as iron, cobalt, molybdenum, copper, zinc, selenium, magnesium and others. In most instances, there are more than enough of these to satisfy the growth requirements of organisms in the ocean. In some places, however, far from continents that can supply material in dust and from rivers, one or more of these metals can limit phytoplankton growth. Recent oceanographic programs such as IronEx, SOFEX and SOIREE studied the phytoplankton blooms that occurred after scientists added iron to ocean regions that were growth limited by this rusty element. This effect has even been suggested to be a solution to the problem of global warming, as the iron-stimulated plant blooms indirectly remove carbon dioxide (a greenhouse gas) from the atmosphere. See the Café Thorium website for more details on iron addition experiments and the potential pros/cons of engineering the ocean carbon cycle with iron.

Even with these intensive studies, there are large gaps in our understanding of iron cycling in the ocean, and in VERTIGO we plan to address some of these questions. For example, how much iron and other important metals leave the surface ocean attached to particles, and how much is released back to the water in the “twilight zone” when the particles are decomposed by bacteria?

Meanwhile, back on the Kilo Moana, the problem remains as to how to collect uncontaminated samples. The solution was laid out by the late Claire Patterson of Caltech and others. Dr. Patterson, during the course of studying lead isotopes in meteorites and rocks that eventually provided the first accurate age of the Earth, realized that lead contamination from gasoline was polluting the globe and altering his samples. He developed the use of “ultraclean” techniques to collect, handle and analyze environmental samples from trace metals and encouraged others to use them. Soon it was clear that most of the trace metal data collected prior to the use of these techniques were not accurate. Here on the KM, we’re doing what we can to employ these techniques and ensure that our measurements of the middle of the periodic table are correct. These include rigorously cleaning all our collection bottles with acid, and handling samples with gloves on and under a clean air bench that removes dust from the air. We’ve also cleaned all parts of our sediment traps with acid and used non-metallic material wherever possible. And instead of sampling from the rosette, we collect water using Teflon-coated Niskin bottles that can be deployed closed, open up below the ship and then closed again at our target sampling depths (so called “GoFlo” bottles). These samplers are deployed on Kevlar line as well and through a plastic sailing block, to avoid the rusty steel cable used on the CTD. It’s a slower process than collecting water by CTD, but when done during a Hawaiian sunset, shouldn’t be rushed.