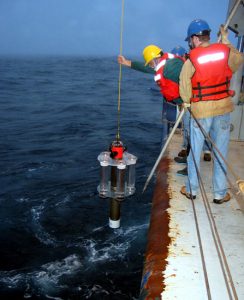 We have a number of instruments on board the ship which when deployed are tethered to the ship or to surface moorings so we’re able to track them and know where they are at all times.

Other Instruments known as NBSTs (Neutrally Buoyant Sediment Traps) are free drifting, and when deployed are not tethered to the ship. The NBSTs are fitted, see Fig. 1, with sample tubes into which the ocean flux is collected and returned to the surface from depth to be analyzed by the scientists onboard the ship. These instruments are neutrally buoyant, they sink to and actively maintain a preprogrammed depth for the duration of their mission, see Fig.2 – 500 m depth record. 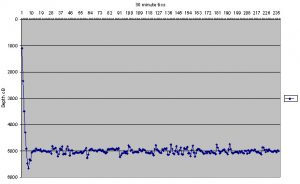 A typical mission ranges from three to five days at depths of 150 to 500 meters (approximately 450 – 1500 feet deep) in the ocean. During this time the instruments are pushed along by the prevailing currents and generally travel from 10 to 20 nautical miles over the term of their deployment. This doesn’t sound very far away, but keep in mind that when the NBST is at the surface (see Fig. 3) only the orange cap is visible. It’s about the size of a 2 liter bottle of “Coke” in the middle of a very, very big ocean. It’s a proverbial “Needle in a Haystack”. Couple this together with a 6 to 10 foot + swell and a wind speed of 35 + knots producing whitecaps and blowing water and you’ll have some idea of how daunting a task finding an NBST can be!

During the daytime it’s difficult to see small objects in the water as reflections and the glare of the sun on the sea surface limit our ability to see partially submerged objects. At night, the ship goes ‘dark’ – sources of light not critical to the ships operation are shut off and portholes covered. Your eyes are very sensitive to light, you can see very well at night once your eyes become adjusted to the conditions. Sailors refer to this as ‘night vision’. 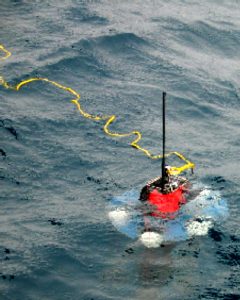 Technology to the Rescue
At the completion of the mission the NBST returns to the surface to be recovered. Assuming no instrument anomalies, that’s the easy part as the NBST uProcessor is simply following a pre programmed cycle of events. Once it’s on the surface, WE have to find it! The engineers at Woods Hole (with years of sea going experience) designed a number of recovery aids into our NBSTs. They knew before leaving the laboratory a half a world away, that locating a NBST after deployment would not be trivial.

We choose to make our planned recoveries at night as we have a small LED flasher on the top of the instrument. Although the flasher is low power it can be seen up to 2 miles away under ideal conditions. Remember the ocean is pitch black at night and any source of light is readily observed, our ‘night vision’.

It also helps to have some idea of what direction to look as the flasher is not very bright and being so low to the water is often obscured by waves or swells. The recovery technique is relatively simple but relies upon a set of complimentary satellite technologies. The uProcessor which guided the NBST back to the surface now communicates with a number of self contained modules to facilitate its recovery.

First of all, when the NBST reaches the surface it turns on an internal GPS (Global Positioning System) receiver to determine it’s position. GPS (initially developed for use by the DOD for the US military) has an accuracy of about 10 meters (approximately 30 feet) – if we can get this close we should be able to see it! Once the NBST has figured out where it surfaced it needs to pass that information to the ship so we know where to focus our search. It does this by utilizing the Argos satellite data / relocation system. The NBST has a small, low power (1 watt) Argos transmitter. Once the GPS position is known the transmitter is activated, embedded in the Argos data stream is the GPS position. The satellite data is down linked in France and ultimately forwarded to the Woods Hole Oceanographic Institution. WHOI then ‘strips’ the relevant position information and forwards that data to the ship via yet another commercial satellite downlink. All of this occurs within minutes (typically 30 – 90 minutes) of the NBST surfacing with no human intervention!

We now have all of the necessary information to find the NBST. As we steam (steer) the ship towards the GPS position we have the ability on board the ship to listen on the Argos uplink frequency utilizing a sophisticated RDF (Radio Direction Finding) receiver. With this receiver we can generally hear the NBST transmitter at a range of 5 to 7 miles. It provides a local readout of the Argos data (the GPS position of the NBST) as well as a relative signal strength and relative direction to the NBST from the ship.

Having some idea of where the NBST will surface can be extremely helpful, we can pre-position the ship for recovery and save valuable time. Remember, once deployed, the NBST is pushed along by subsurface currents. On board the ship we have an ADCP (Acoustic Doppler Current Profiler), this instrument allows us to gather data on the subsurface flow at various depths while underway. One of our collogues, Eric Fields (UC Santa Barbara), monitors the ADCP data and formulates his best guess (and he’s really good at it) as to where the NBST will surface. If we are within a few miles and are within range of the Argos transmitter we are generally able to recover the instrument within an hour of it initial surfacing. It’s nice when a plan comes together!

Last but not least is takes an experienced captain and mates to maneuver a 300 foot vessel to within 10 feet of the NBST at the surface!