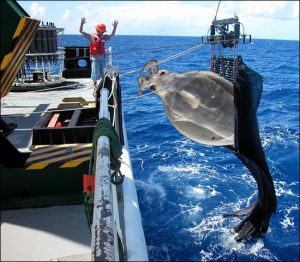 Never has and event caused so much stir amongst the scientific community so fast, as a giant squid being captured alive for the first time ever on the R/V Kilo Moana, July 1st, 2004.

“Rarely do we see any organisms in a zooplankton net over 5cm in length,” said the stunned Robert Condon, a graduate student working at the Virginia Institute of Marine Science, “I mean, if we are lucky we’ll catch some foot long jellies but never this!”

Joe Cope, a MOCNESS expert, believes this unusual capture is due to the net sitting at the surface for so long before it is hauled in. Chefs Jimmy, Shawn, and Donnie down in the galley have started sharpening all of their knives in preparation for the greatest 4th of July calamari feast ever, however they will have to wait in line as the Monterey Bay Aquarium Research Institute has offered funding and instant tenure to any scientist able to bring back a giant squid alive.

“I may have to hold off of studying harmful algal blooms for the time being,” exclaims MBARI scientist Mary Silver, ” I wonder if we can train it to do plankton tows.”

“We are turning Lisette and Clodagh’s stateroom into a makeshift aquarium as there is a nice water release system present right in the bunk already,” says scientist Tom Trull, excited about the fact that the giant cephalopod was captured in the MOCNESS and not in one of his sediment traps.

Chief scientist Ken Buesseler sits at his desk aboard the ship shaking his head in disbelief, “that’s one big particle,” is all he says.