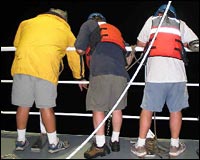 Jim Valdes is certain he has spotted whatever it is they are looking for with Steve Manganini and Eric Fields. Although on further scrutinization it became apparent that the ships ablutionary activities might have been to blame.

Phytoplankton don’t expect much from life except to chilli out, fix some carbon dioxide and grow as much as conditions will allow – and fortunately for us mere mortals, liberate an important ingredient for our well being, oxygen. Of course, like anyone else you or I know, their diet requires lots of other goodies too – not including: m&m munching, MacDonald’s burgers bingeing, French fry chomping, tofu sucking, weak tea drinking, fruit masticating, or yogurt slurping. However, they are partial to hoovering up dissolved stuff, such as nitrate, ammonia, silicate, and a smidgin of other tasty morsels such as iron. To make all this happen of course they have developed a neat form of sunbathing which harnesses sunlight energy by a process known as photosynthesis – this is not supplied by the national grid and completely free if you have the ability to do so. Needless to say that this carry-on produces much excitement and glee for certain members of the oceanographic community, and when conditions are favourable lots of green stuff is produced – which can’t be smoked (too wet), but can be made into thick shakes (for those of intestinally challenged disposition). However, I diverge, as one of the big questions pondering those of scientific inclination – and fellow colleagues on this voyage – is “Where does it all go dude?”

For those craving a more technical, scientific appraisal, the upper 500 m of the water column is a zone characterised by pronounced vertical gradients in particle concentrations and fluxes. The marked decreases in both concentrations and fluxes are thought to be due largely to the solubilisation of settling particles by heterotrophic bacteria – which is difficult enough to say let alone measure – something that we as a group hope to address during VERTIGO. As such, many of our colleagues will measure the concentration and / or the downward flux of particles. We are monitoring primary productivity in the euphotic zone during the voyage (14C size-fractionated incubations and photosynthetic characteristics, Fv/Fm) and measuring proxies for the solubilisation for particles using several techniques. The deployment of a surface tethered drifting array of respiration chambers at several depths will provide estimates of water column respiration below the mixed layer – this will be mainly bacterial respiration at in situ temperature and pressure . These estimates will be compared with shipboard incubations of water column respiration at in situ temperatures, particulate organic carbon (POC) remineralisation incubations , and estimates of bacterial electron transport system (ETS) activity from 50 to 500 m depth. Samples are also being taken for bacterial ecto-enzyme activity over the upper water column using kindly provided filter punches from MULVS (Monstrously Ugly Leviathan Vacuum-cleaning System – “its life Jim but not as we know it”). Thus, by looking at the disappearance‘ rate of material from the upper ocean – using respiration rates with other assays – we can compare vertical gradients with those of other VERTIGO collaborators looking at the corresponding changes in the vertical gradients of particle concentrations and fluxes.

The voyage for our group started off with a hiss and a roar and was preceded by the soundless explosion of my colleague’s appendix (Philip’s appendix is not to be confused with what’s at the end of an article or report, but has been proven to be a painful remnant of more ruminant days in our evolutionary past when we grazed on pastures greener). As they say in the business, “the show must go on” – solo if required. And it is so. After many days of box hunting, head (and posterior) scratching, facial hair growing and the common greeting of strangers with, “Grunt, have you got any…? have you seen any?….thanks….have a nice day!”, most experiments were poised for action. Finally on top of things, the carefully prepared and finely tuned respirometer chamber array was chucked in the water. A successful deployment that will continue to sample for an indefinite period of time – “Disappearances can be deceptive“. Data from experiments and preservation of collected samples for shore-based laboratory analysis keep rolling in with gay abandon. Results of these intensive sampling techniques will not be known until the preserved samples are analysed and compared with other group findings. Until then, pushing back the front ears of science and will have to patiently wait.

Mark Gall looks on as the respirometer mooring is released for a long-term deployment. 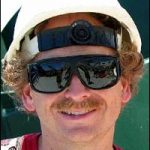 Collaborator Tom Trull – more affectionately known as ‘Crusty’ – is a happy man if well fed, watered and on top of his work. Crusty is sporting the latest neuro-optical protection technology, with accompanying cranially adjustable sunhat. These items will become an important fashion statement for oceanographic scientists of this decade.

The butchery of respiration chambers with attached pressure / temperature sensors. Chambers are programmed to open and close each day, measuring changes in oxygen concentration of the contained sample at 10-minute intervals over a 24 hr period. 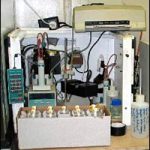 Winkler oxygen titrations. Like some weird reality arcade game, after enough practice, levels of skill and therefore precision are reached. An accuracy of < 0.2 % between replicates are required to detect differences in oxygen consumption (respiration) of approximately 0.5%; after 24 hrs of dark incubation.