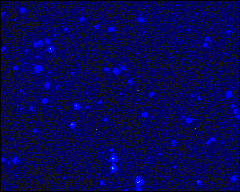 The bacterial cells are the tiny light-blue dots; they’re about 0.5 micrometers in diameter or about 1/500th of the width of a human hair. (Photo by Ben Van Mooy)

There are over a billion bacteria in every gallon of seawater at the VERTIGO sight, and these organisms play an important role in regulating the quantity of particles that are caught in sediment traps. Karen Casciotti and I (both from the Woods Hole Oceanographic Institution) have big plans for the bacteria that are being sampled on the VERTIGO cruise, but getting them back to WHOI can be a little tricky. Bacteria are too small to be studied visually, and instead their DNA will be characterized using advanced molecular biological methods. Our analyses will give us an important understanding of which bacteria were present in the water and which bacteria were interacting directly with sinking particles during the VERTIGO cruise.

Here’s our problem: once bacteria are isolated from seawater or particles, their DNA quickly degrades, which can alter the genetic signature of the bacteria before the DNA analyses can be conducted. To prevent this, Karen is immersing the bacteria in liquid nitrogen, which brings their temperature down to a chilly -200 degrees Celsius, (that’s -325 degrees Fahrenheit; colder than Saturn). At these temperatures, DNA will not undergo any degradation. However, if the samples thaw even slightly, bacterial enzymes will quickly come to life and destroy the DNA. In a couple of days, I’ll meet Karen and the rest of the VERTIGO crew in Hawaii to assist in transferring the samples to special cryogenic shipping containers for the flight home.

When in Hawaii, I will also preserve another set of samples that Karen has collected, which should provide us with critical information about how fast the bacteria were growing during the VERTIGO cruise. On the R/V Kilo Moana, Karen has incubated seawater with tiny amounts of thymidine, a molecular precursor to DNA. Using a technique called “trichloroacetic acid precipitation”, I will extract all of the DNA from these incubations and then measure how much thymidine was taken up by the bacteria. From this data I can determine how fast the bacteria were replicating their DNA, and, since bacteria replicate their DNA each time they divide, I can tell how fast the bacteria were dividing or growing. These results should allow us to constrain the role of bacteria in regulating the flux of sinking particles. 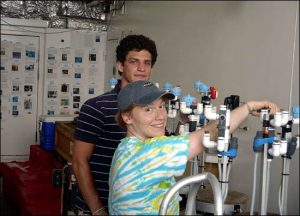