All thoughts are moving on shore as we steam in to Honolulu on this final day of our research cruise here on the R/V Kilo Moana. It is hard to measure the impact of any given cruise, but certainly this VERTIGO cruise has had more than its share of success. 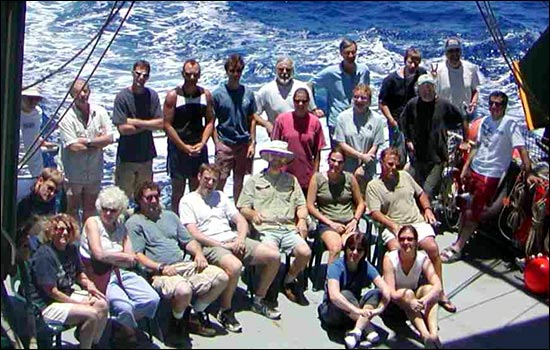 In cruise jargon, the “event log” is a listing of every activity when a piece of scientific gear is put over the side of the ship, and on this cruise we had over 200 such events in less than 20 days, so something going in/out of the water every 2 hours, 24 hours a day. These events included: 102 CTD/Rosette casts where we collected water samples and used sensors to sample the upper 1000m of the ocean; 16 out of 16 deployments, and more importantly 100% successful retrieval of our unique free drifting subsurface traps, the NBST’s, that work like no other trap to accurately capture sinking material in the ocean; deployment of 8 other traps of differing designs from drifting surface buoys, including successful use of a new sediment trap that separates particles by sinking speed; collection of microscopic scale photos of sinking marine particles with an optical sediment trap, 8 deployments of the MOCNESS plankton nets, 5 deployments of a large volume pumping system, MULVFS, that filters 16,000 liters of seawater at up to 12 depths in one cast; numerous net tows for various kinds for detailed plankton studies; and I’m sure I’ve forgotten something. Simply put, we’ve collected an amazing amount of new and unique data and samples.

From these samplers, we have bottled, filtered, examined microscopically, incubated under controlled lab conditions, preserved chemically, frozen in liquid nitrogen, dried, and otherwise prepared for further biological and chemical analyses many 1000’s of samples. In my lab we have collected over 600 samples for the analyses of thorium-234 alone, and are bringing back almost 500 different samples for chemical analyses of sinking and suspended marine particles! So more than any prior study, we have a 3-D view of the changes over time in marine particle sources, their characteristics, transformations, and fluxes, in particular those that sink from the surface to the deep ocean. 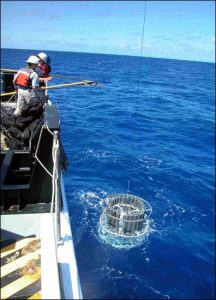 None of this would have been possible without an excellent crew, led by Captain Bryon Wilson and his crew on the R/V Kilo Moana, and we must thank them in large part for our success. Support from our home Institutions is important and with this international team the list of science agencies involved is also long, but high on our list is the Ocean Sciences Division at the US National Science Foundation, who have funded the ship time and lion’s share of the US science groups, with assistance from the US Department of Energy, Ocean Carbon Sequestration Program.

As a group, the VERTIGO scientists learned from each other and made new friendships, both of which are an important part of going to sea. Science adventures such as this one are rare opportunities, and it is especially pleasing when they go so well. What was particularly fruitful in this case, is that we had all of our groups working together to assemble different parts of this complex VERTIGO puzzle, related to the physics, biology and chemistry of the ocean particle cycle.

There is little left now but to thank all of my colleagues here at sea and on shore for their hard work and intellectual contributions. Its time to pack up carefully and think about the trip home, reunions with family and friends, and of course the work that awaits us and next year’s cruise!