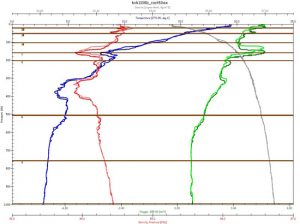 Plots from the CTD cast at Station 5 revealed a colder, fresher, more oxygenated feature at 160 meters that Ken decided to sample. The green line shows oxygen content in the water, blue is temperature, and red is salinity. Darker lines show readings on the descent and lighter on the way back up. Horizontal lines show where sample bottles were tripped. (Woods Hole Oceanographic Institution)

Last night we came to the end of our first sampling line, the furthest offshore. Everyone was looking forward to a little down time (even the people on the midnight to noon watch) and there were grand plans floated to watch movies or get caught up on work. A few stayed up, but after dinner, people mostly just filtered away to bed.

It was probably for the better. After only 14 hours, we arrived here at Station 10, the bow pointed down a fresh line of sampling stations. At 6:00 a.m. sharp, the Methot net went in the water and we started all over again.

This time, though, we are going to stop two stations short and turn for the in-shore legs a little early. On the early part of the first leg, we were bucking a 4.5-knot current that cut our headway in half and put us almost a day behind schedule.

Like the Gulf Stream, the Kuroshio is not a single, pipe-like flow of water. Instead, it meanders, splits into smaller streams, and sometimes bends back onto itself forming eddies that swirl far north or south of the main branch of the current. On our way up the first leg, we apparently ran head-on into one of these small streams, or filaments, and couldn’t do anything except continue to bull our way through.

Eventually, the filament turned away from our intended course. John Gall, the chief mate, said and the surface of the ocean changed noticeably when it did and the ship surged forward. One of our physical oceanographers on board, Steve Jayne, said these features are difficult to model because they are so chaotic and so small. They are, however, very important to understand, as they can impede shipping, resulting in increased transit times (as we experienced) and shipping costs, or even slow down ships responding to a mayday. On the open ocean, that can mean lives lost.

It can also work both ways, of course—another of those filaments carved an hour off of our expected transit time overnight to Station 10. In the Gulf Stream, swordfish and other predator fish tend to congregate along filaments, giving them added biological and commercial significance. 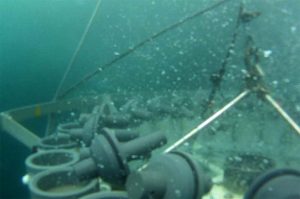 A rosette sampler enters the water with 24 Niskin bottles open and ready to be tripped. On a signal from the surface, lids on the top and bottom of a bottle spring shut, capturing a 12-liter sample of seawater. (Woods Hole Oceanographic Institution)

We’re interested in fine features beneath the surface, as well. With every rosette cast, a group forms around the instrument display in one of the labs to watch traces form from the oxygen meter and CTD sensor (reading salinity, temperature, and pressure). The physical oceanographers read those graphs like a story that tells the origin and evolution of water at different depths. The chief scientist, Ken Buesseler, can then refine his sample plan on the way back to the surface in order to get water that might be more interesting slightly above or below where he’d originally planned to trip one or more bottles.

Recently, for example, we’ve been seeing signs of fresher, colder, more oxygenated water somewhere around 300 or 400 meters. Water in the Kuroshio flows up the tropics and as a result is generally saltier (because more water has evaporated), less oxygenated, and warmer than water further north of us. It’s possible, therefore, that the blips we see in the salinity, temperature, and oxygen data are either water from the northern mid-Pacific being mixed in by the movement of the Kuroshio through the open ocean. More crucial to this cruise, however, is the possibility that it could be a signature of surface water that traveled down the northern coast of Japan with the Oyashio current, past Fukushima, and then out to us along the Kuroshio.

If it is, we should be able to see signs of radium in the samples we’ve taken from those depths. Radium is a naturally occurring radioactive element that only comes from sources on land, including ground water flowing into the ocean. So if we see both radium (which we can test for on board) and cesium-134 and -137, then it’s a good bet we’re on the right track.

We’ve also begun deploying Argos drifting buoys so that oceanographers back on land can track and better understand the movement of the Kuroshio and its many mystifying features.