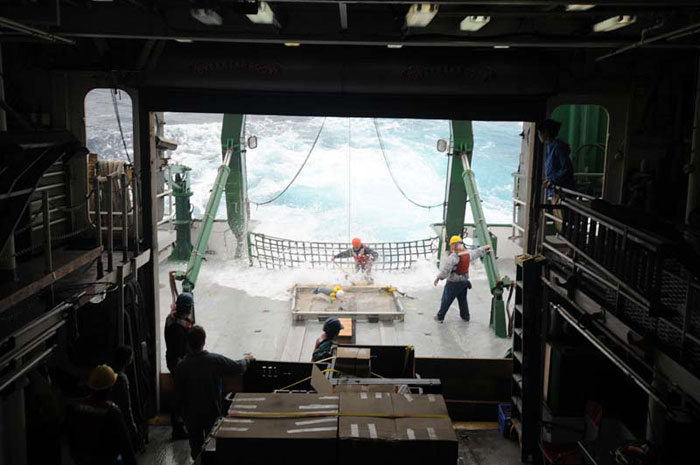 Ocean Technology Group technicians Justin Smith and Paul Balch work to secure the Bongo net on the aft deck while a group watches from the safety of the hangar. (Photo by Ken Kostel, Woods Hole Oceanographic Institution)

It’s Saturday, so I’m going to let someone else do some of my work for me today. In his book Seven-Tenths: Love, Piracy, and Science at Sea, WHOI’s David Fisichella does as good a job as anyone in describing the way that chemical oceanographers use tracers to study the ocean—something that will be of particular importance this coming week:

The oceans are in constant motion, circulation in and out of basins and around continents. The water in the North Atlantic may take hundreds of years to circulate around back to its point of origin. As these parcels of water move about, their properties, i.e., salinity, dissolved oxygen, and temperature, change. This change, however, happens very slowly. Oceanographers look at these properties as a forensic scientist looks at fingerprints, and by taking careful measurements can tell where the water originated. In some cases, other elements have been introduced into the water from external sources; these can include nuclear fallout and pollutants. These elements, called tracers, can be used by oceanographers to follow the path of water for thousands of miles.

This idea that there are discrete, identifiable “parcels” of water beneath the surface seems counter-intuitive at first, but if you look at the CTD plots from yesterday, you’ll begin to get a sense of this. It forms the foundation of much of our knowledge about the world’s ocean and will play a large role in what we continue to do throughout the coming week and for years to come in studying radioactive releases from Fukushima. 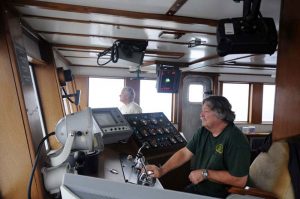 Today, however, our search for these parcels has come to a grudging halt. Fifty-knot gusts and 7 meter waves have made it impossible to do much of anything except catch up on work or sleep. Last night, we attempted to make a 2,000 meter cast with the CTD rosette, but we were obviously back in the Kuroshio current. A 4.5-knot current combined with 40-knot gusts to send the CTD wire out behind the ship at an awkward angle. With nearly 1,700 meters of wire out, we just barely made it to 900 meters depth. Then, before any bottles could be tripped, the wire angled the rosette up even further to 720 meters.

But that’s what happens when you go out on the ocean looking for answers. Sometimes you are stymied by the very thing you want to study.