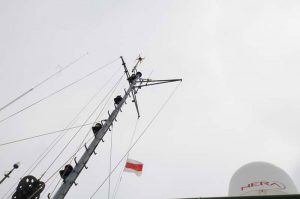 Now that we are sampling inside Japan’s exclusive economic zone, we are required by the government of Japan to fly this flag at all times. (Photo by Ken Kostel, Woods Hole Oceanographic Institution)

We’ll come back to tracers in a bit. There are a couple of changes to report, first. For one, the weather has eased considerably. Seas are easy and the sun is just barely shining through a hazy sky. About the only wind out there is whatever we can generate with forward motion.

Most of us got a good night sleep and are now well in tune with the rhythm of our daily sampling schedule, so there is suddenly enough time to do things like check pumps, rig a long, or (for me) shoot more photos and video footage of little details on the ship. There is also more debris in the water—broken lumber, ripped tarps, chunks of Styrofoam—some of which was probably washed out to sea by the tsunami on March 11. We’ll undoubtedly be seeing more as we get closer inshore, beginning tomorrow.

Which leads me to our second change. Instead of working our way toward shore in a series of four-station legs, we are going to cut across the top of the inshore “box” by zigzagging between the top two stations of each leg. That will help get us to the innermost leg quicker and give us a little buffer in case we have more bad weather and have to stop work again.

Because it’s closest to the nuclear reactors at Fukushima, that inshore leg is important enough that we don’t want to leave it to the last thing. The only reason we didn’t start inshore and work our way out is because Ken didn’t want to potentially contaminate our sampling equipment with the slightly higher levels of radiation we expect to see there. We’ll just have to take extra precautions when we work our way back offshore to fill in the box and, if we have time, to complete the stations we had to abandon yesterday because of weather.

The radiation is, of course, one of the main reasons we’re here. As far as we know, this cruise is the first comprehensive study looking at the fate of Fukushima radiation both in the open ocean and the biota. The samples we gather will help give a better idea of how much radiation is out here, where it’s going, how quickly it’s mixing into the ocean, and how it is working its way into the marine food chain. I’ll address that aspect in the next few days. But the radiation released from Fukushima also has implications for oceanography in another way.

Many tracers that help oceanographers study physical and chemical processes in the ocean are radioactive. Some of these are natural—isotopes of thorium, uranium, and radium, for example—and some are there as a result of human activity. This latter group includes isotopes of plutonium and cesium deposited in the ocean by atmospheric nuclear weapons testing in the 1950s and 60s or by releases from Chernobyl, Sellafield in the U.K., and Cap le Hague in France. Whether natural or manmade, radioactive tracers are important because each has a particular origin and behavior. Some naturally occurring radioactive isotopes are formed continuously as cosmic rays interact with the atmosphere (carbon-14 is one). Others, the so-called primitive isotopes, were generally formed millions or billions of years ago

In the ocean, each of the isotopes has its own particular behavior. Some dissolve, mixing and moving with their “parcel” of water over time and distance. Others adhere to particles and sink to the bottom, accumulating in layers at the bottom, or are consumed by animals at the base of the food chain that graze on marine snow—bits of organic matter in the water.

Each isotope also has an internal clock that allows oceanographers to study processes that play out over different time scales, such as water transport from one ocean basin to another or sedimentation rates in the deep ocean. This clock, the half-life of each isotope, is the time it takes for one-half of the atoms in a particular sample to give off radiation and decay to its so-called “daughter” products. Iodine-131, for example, has a half-life of eight days, which means that after that amount of time, half of it will decay to form xenon-131, which has its own half-life and behavior in the environment.

The accident at Fukushima injected a whole new suite of radioactive tracers into the North Pacific, each with its own behavior and half-life, that will almost certainly be used by oceanographers to extract information from the ocean for decades to come. In fact, Ken started his career studying radiation from nuclear weapons in the Pacific that was carried to the Atlantic and isotopes released into the Black Sea from Chernobyl. There very well may be someone on this cruise whose career is being similarly forged. 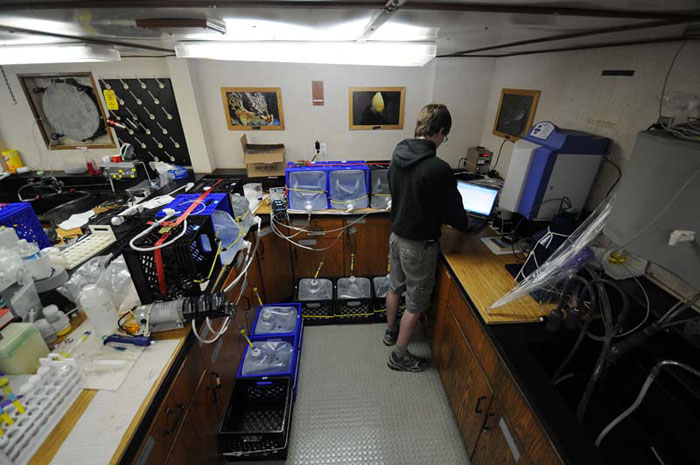 The lab space on R/V KOK has been configured to do many things and to remain safe in heavy weather. This corner is devoted to both processing water samples, which are lashed to the counter and floor, for cesium analysis and to Jarvis Caffrey’s station radiation monitoring station. (Photo by Ken Kostel, Woods Hole Oceanographic Institution)