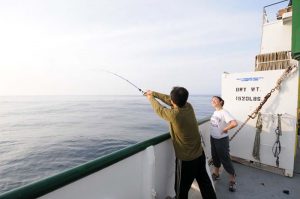 Jennifer George watches Jun Nishikawa cast off the rail during a break from work at a super station. (Photo by Ken Kostel, Woods Hole Oceanographic Institution)

We’ve entered a stretch that calls for us doing five so-called “super stations” interspersed with what we’ve termed “demi stations.” Our standard sampling station includes a CTD cast to 1,000 meters with a net on the wire that gathers phytoplankton from the top 100 meters, four Bongo net tows to look at zooplankton and small fish at about 250 meters, and a three-hour pump to filter cesium-134 and -137 out of surface water. (Since confirming that daytime tows with the big Methot net were not gathering much, the biologists suggested doubling the Bongo tows during daylight to increase the sample size that it is bringing in.) All of this takes about four hours.

On a three-hour demi station, we do only two Bongo tows and the usual CTD cast, but without the phytoplankton net. On a super station, we pull out all the stops. In addition to the standard sampling menu, we add a Methot tow (if it’s dark) and a 200-meter cast with four battery-powered pumps attached to the wire at 20, 50, 100, and 200 meters. These pumps contain a series of filters that capture small particles in the water, radioactive isotopes that stick to those particles, and cesium, which is one of the isotopes of particular concern coming from Fukushima. After three hours, the pumps have filtered about 1,000 liters of water and shut off automatically. Last night, we also made a 2,000-meter CTD cast.

While the pumps are running, Crystal Breier is on the stern deck filling three large garbage cans with seawater water that she filters slowly (at one liter per minute) to extract radium. Radium is an element that originates on land and has several naturally occurring isotopes, two of which have relatively short half-lives, so any signs of those would indicate that there is groundwater from the nearby coast of Japan mixing into the ocean around us.

On top of that, Hannes Baumann, one of the biologists from SUNY Stonybrook, has begun hanging a long line off the stern at super stations to catch something a little further up the food chain than the Methot net will bring in. So far, we haven’t had much luck, but the local wildlife has discovered that there’s bait to be had and we’ve become very popular with a host of seabirds (Laysan’s albatross and northern fulmar are two we’ve identified so far) and a pair of very curious furred seals. 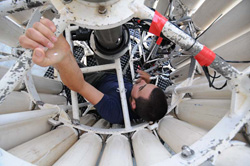 All of that together gives us a suite of water samples from the surface to at least 1,000 meters that will be tested by us and by collaborating labs around the world for nearly twenty different radioactive isotopes. In addition, we’re taking biological samples ranging from phytoplankton up to (hopefully) large predators at nearly every station. Much of this bears repeating from earlier posts, as the pace of sampling will pick up considerably over the next few days and I’ll most likely be referring to many of these methods again soon.

Last night was a warm, quiet night with an easy swell moving up from the southeast. A group of us stayed on deck while the pumps ran and we did little else but stare at the orange float marking the top of Hannes’ line. A few people tried casting one of Jun Nishikawa’s homemade lures off the other rail, but even that seemed like too much effort and eventually we all fell into an easy rhythm of joking, swapping stories, and prolonged periods of silence.

From here, we begin a zigzag course to the west, alternating between demi stations and super stations. Instead of watching sunsets from the stern, there will most likely be an increasing backlog of samples to process.