I’ve touched on marine chemistry, physical oceanography, and marine biology over the past few days, now it’s time to delve into the dark arts of marine geology. Dark because much of what marine geologists study takes place deep beneath the bottom of the ocean.

Late last night we made our closest approach to the epicenter of the March 11 earthquake that began the chain of events leading to this cruise. The quake registered magnitude 9—one of the largest on record—and ruptured nearly 300 miles of fault beginning 20 miles beneath the surface of the seafloor.

Where the Euro-Asian Plate and the Pacific Plate meet, relative motion between the two has created the deep Japan Trench and occasionally causes strong earthquakes like the one that occurred on March 11. That event caused the island of Honshu to move east as much as four meters and to subside as much as one meter in places. (Adapted from Jeff McGuire, Woods Hole Oceanographic Institution)

The type of fault that broke is part of what is known as a subduction zone because it is a place where one tectonic plate in the jigsaw puzzle of Earth’s crust is forced beneath, or subducts under, another plate. Off the east coast of Japan, the Pacific Plate is slowly being pushed under the Euro-Asian Plate. Much of the Japanese island chain experiences frequent earthquakes as a result.

The rate that tectonic plates move is not great, only about an inch per year on average, but where they meet they are often locked together. Over time, the plates bend and deform, building up stress that is periodically released in the form of an earthquake. Many factors govern the size of an earthquake—the geometry of the fault, the type of rocks at the interface—but for the most part, subduction zones are responsible for most of the largest earthquakes on record.

Subduction zones are also the source of most tsunamis, which are caused when large portions of the seafloor change shape suddenly, displacing huge amounts of water. This most often happens when a submarine earthquake ruptures the ocean bottom or when an underwater landslide moves vast quantities of rock and mud. In the case of the March 11 earthquake, movement of the Pacific Plate was causing the Euro-Asian Plate to bend downward. When the fault ruptured, the Euro-Asian Plate suddenly snapped out and long section of the plate, including many parts of the island of Honshu, moved several meters to the east as the stress along the fault was released.

Many earthquakes do not break the surface of the seafloor, but this one evidently did, creating a pulse that spread out in all directions through the water. In the open ocean, a tsunami usually appears to be no more than a few inches high, but unlike a surface wave it reaches to the bottom. When it approached shallow water the tsunami (actually a series of waves), rose up, revealing its full height and breadth and swept miles inland in places. 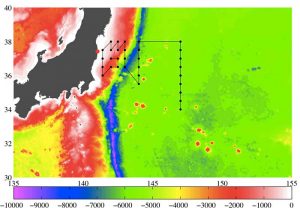 Meanwhile, the fault that broke readjusted to its new configuration for weeks by releasing hundreds of aftershocks, several of which were significant events in their own right. The rupture also increased stress on the edges of the segment that broke, raising the likelihood that another large earthquake will occur further north or south along the fault in the future. Whether the next one will also create a tsunami is an even deeper part of the dark arts that would take far more time and an internet connection to work through.