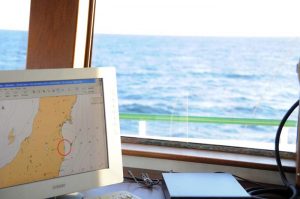 We are required to maintain a 30-kilometer minimum distance (red circle) around the damaged reactors at the Fukushima Daiichi nuclear power plant. (Photo by Ken Kostel, Woods Hole Oceanographic Institution)

At a little before midnight, we arrived at Station 25, our closest approach to the Fukushima Daiichi nuclear power plant that is the source of the radiation we are trying to measure. We plan to spend 12 hours here doing extra net tows, an extra-long surface pump, and perhaps an extra CTD cast. Fortunately it’s shallow—a little over 100 meters—so at least the CTD casts will be very short. Tricky, given the depth, but short.

The Methot net is currently in the water under an almost-full moon, and a Japanese coast guard ship is keeping a wary eye on us from just inside the 30-kilometer exclusion zone around the reactor complex. They pulled in close to question us when we came on station earlier, but eventually let us continue without too much fuss.

We are continuing to measure radiation in the air and water, as we have been since we left the dock, but it remains far below the level of concern. In fact, we’re still receiving a background dose of radiation that is one-sixth the average daily dose on land. That’s mainly because we are not surrounded by rocks and concrete buildings—known sources of things like as radon.

We are, however, detecting the presence of cesium-134 in the water, and there is only one likely source of that particular isotope—the damaged reactors at Fukushima just off to starboard.

Determination of the exact concentration will require more precisely calibrated instruments than those we have on the ship (bulky precision equipment does not always take to sea very well). What we can tell for now is that the amount of cesium-134 in our samples is lower than that of potassium-40, the most common naturally occurring radioactive isotope in seawater.

The larger questions—those that we are working towards with this cruise—include the full range of isotopes that were released from the reactor that and may yet be released, how fast and by what paths cesium and other isotopes are being diluted into and removed from the North Pacific, and how these different substances might be assimilated into different levels of the food chain.

From that relatively straightforward set of questions, there are yet more that need to be answered that are beyond the scope of our work: How much seafood is safe to eat? What is the risk presented by different types of seafood? What parts of the ocean are safe to fish and when, if ever, will the most heavily contaminated regions become safe again?

It’s frustrating not to get immediate answers to these latter questions, especially for the Japanese people, who rely so much on the ocean for food. As difficult as this cruise was to organize and as complicated as our measurements are to make, it seems the tough part is yet to come—translating our science into sound policy decisions. It almost makes sitting here within sight of four horribly damaged nuclear reactors feel like the safe place to be. 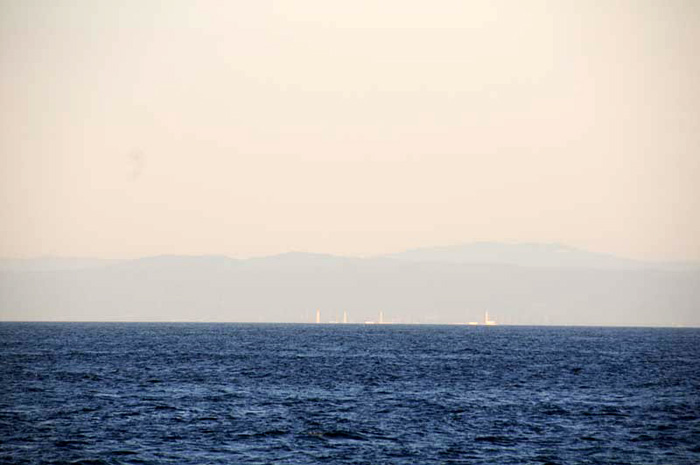 The reactor complex at Fukushima from outside the exclusion zone. (Photo by Ken Kostel, Woods Hole Oceanographic Institution)