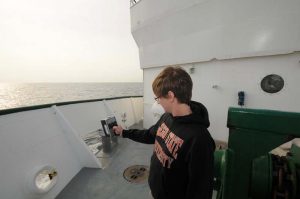 Jarvis Caffrey from Oregon State University makes his daily assessment of our effective dose on the ship. So far, we’ve received less radiation than we would have on land, primarily due to the lack of such naturally occurring sources as radon out here. (Photo by Ken Kostel, Woods Hole Oceanographic Institution)

It’s been a while since I’ve seen a newspaper or checked the internet, but I seem to remember a fair bit of confusion in the media over how radiation is measured before we left. So here goes nothing.

The most basic radiation detector provides its readings in counts. These are simply the number of atomic decay “events” (since each atomic decay can result in several releases of radiation) that it detects in a sample. But since no detector is perfectly efficient, that number needs to be adjusted to provide an actual number of decays that occur over a given time period. That number is generally expressed in Becquerels, which is one radioactive decay per second.

Often, this is expressed per unit volume or weight to make it more meaningful. After all, one Becquerel in a sample the size of your thumb is much different than a Becquerel in something the size of a house. We’re using Becquerels per liter (Bq/l) to describe the concentration of radioactivity in the seawater samples we’re collecting. The background level of radiation in the North Pacific before March 11 was around 10 to 15 Bq/l, primarily due to the presence of potassium-40, a naturally occurring isotope, with much smaller contributions provided by fallout from Cold War-era atmospheric nuclear weapons testing.

But radiation in a sample of seawater is not the same as radiation that impacts the human body. So, to express what’s known as the absorbed dose we have the Gray or the rad, which measure the energy that a radioactive source provides to one kilogram of human tissue.

Not all types of radiation are the same, however. X-rays and gamma rays can penetrate more easily through the skin, but dose for dose are less harmful than the increasingly energetic beta particles, neutrons, and alpha particles. What’s known as the effective dose is measured in Sieverts (or rems, which is 0.01 Sievert). Built into this number is a weighting factor that equalizes these different types of radiation.

It’s also important to specify the time period over which a dose is received in order to accurately compare different doses. Natural background radiation on land gives us a cumulative dose of about 300 millirem per year (300mrem/yr) or 0.034 mrem/hour. By comparison a round-trip flight between New York and London results in 10 millirem over the course of about 10 hours, or 1 mrem/hour.

In addition, external doses of radiation can be less harmful (not always) than equivalent doses that are inhaled or ingested. Alpha particles, for example, are readily blocked by our outer layer of dead skin cells, but if an alpha-emitter is inhaled or swallowed, it can do serious damage to living tissue. In addition, certain elements are chemically similar to one another and radioactive isotopes of one element can be taken up in place of similar, non-reactive elements. Calcium and strontium are very similar, for example, and the radioactive isotope strontium-90 is easily taken up by the bones.

All this to say that you should be aware when comparing radiation concentration, dose, and exposure—they’re related, but not equivalent. We’re primarily measuring concentration out here. It will be up to someone else to determine other values.

This afternoon we turn away from the coast to begin filling in the center of our inshore sample area. Then, time and weather permitting, we’ll either fill in the space between the nearest two legs with more stations or we’ll re-sample along the inshore leg before heading in. 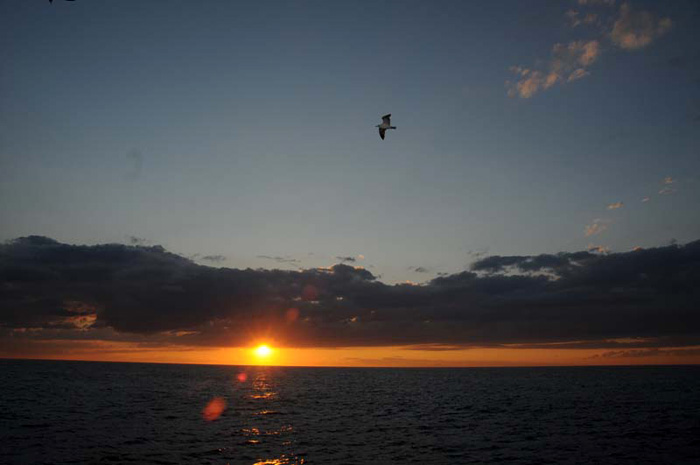 A thoroughly gratuitous picture of a sunset to reward you for reading this entire post. (Photo by Ken Kostel, Woods Hole Oceanographic Institution)