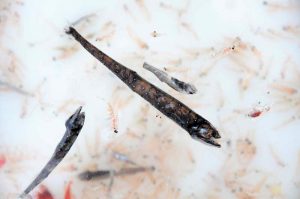 We haven’t had much news out here on the ship the past two weeks other than our twice-daily satellite email uplinks. My wife, however, just sent me something that makes me a little sad. She said that when she tells people where I am one of the most common reactions has been amazement at how quickly the accident at Fukushima and its aftermath have faded from the news.

Of course, that’s the way things are for the media and for the general public. The next big story comes along and something has to be pushed aside. We can only hold so many crises and natural disasters in our heads at one time. As a result, there is too little time for assimilation, for building perspective and understanding.

For something like the release of radiation from Fukushima, it used to be the role of newspapers and the nightly news to help keep the public informed and to present the many nuances that a story like this contains. But print and broadcast media are cutting staff and budgets, and the science beat is an easy target. The wealth of information on the internet works against us, as well, by either tipping the scales toward media overload or by making it far too easy to find just the right information that meshes with our own particular world view.

To top it all off, a story like Fukushima is not easy, or clear-cut, or immediate. We’ve been out here 24/7 on a specialized research ship for almost two weeks with millions of dollars in equipment gathering more than 1,500 samples and thousands of gallons of seawater and the only thing we can say for certain is that, yes, there is radiation in the water and some of it came from Fukushima. Not exactly a stop-the-presses story. That will come later, but will anyone care at that point?

The researchers who are on board or who are eagerly awaiting their samples on land will have answers of some sort in coming months, but in the meantime we wait and the world moves on to the next big story. It’s easy to see how the public could become frustrated with science and the scientific process. People want to know if it’s safe to eat the fish or drink the milk. Decision-makers want to know what they should decide. Everyone wants the truth. 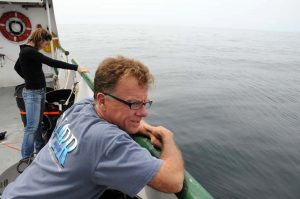 Scientists, though, cannot always arrive at definitive answers. There are error bars on data points and uncertainty clouding answers to even the most basic questions. There’s a reason for that. We live in a complex world that does not always lend itself to simple answers or definitive yes-or-no responses. Science is not about the pithy sound bite—it’s about reasoned responses and careful analysis of hard-won data.

Literally hard-won. I just came from the fantail, where the biology team was wrestling the big net back on deck in the rain and building seas. Up above me, the CTD group is probably getting ready for another 1,000-meter cast that should go in the water after sunrise. Then they will have to begin processing yet another round of water samples. The science crew is a sleep-deprived, fish-spattered, salt-crusted bunch right now. The ship’s crew is just as tired—and they’ve been away from home for a month already with the prospect of another two-week transit back to Hawaii.

Despite this, the mood on board is light. We celebrated a birthday after the CTD came up from Station 28 yesterday (Happy birthday, Sachiko) and everyone can sense that we’re in the home stretch. There’s also a sense that we’re doing something important, that knowledge gained from this cruise will matter in the long run whether it makes headlines or not.

Sometime tonight, we’ll finish the last of our planned sampling stations. Time (which is growing short) and weather (which is getting worse) permitting we’ll either fill in the space between the nearest two legs with more stations or we’ll re-sample along the inshore leg before heading in for our scheduled 10:00 a.m. pick-up of the harbor pilot.