Just like that. The CTD is stowed, the last net is aboard. The engines have spooled up and we’re slowly putting the final station behind us, though we’ll initially head northwest to a point half way between Stations 32 and 25. From there, we’ll turn south and follow a course midway between the two innermost sampling lines so that we can make an intermediate line of surface water samples through the ship’s seawater intake. 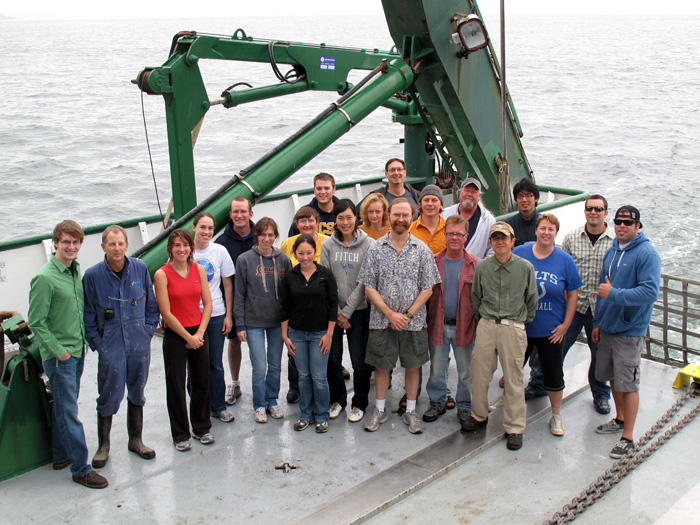 Science crew and members of ship’s crew who could make it on the back deck of R/V KOK entering Tokyo Bay. (Woods Hole Oceanographic Institution)

A preliminary accounting of the fruits of our labor so far includes:
* More than 1,500 containers ranging from 50 milliliters to 20 liters filled from more than 300 logged sampling events, plus filters of samples as large as 1,000 liters
* More than 3,000 liters of water samples weighing more than 3 metric tons that will be shipped to labs around the world after the ship returns to Hawaii
* More than 100 tows resulting in about 50 pounds of biological samples (though there is still quite a bit of water in these samples yet)

All that, and only three sample containers left unfilled. Not bad for two weeks worth of work.

Many of the instruments used to conduct these tests are extremely sensitive, but the amounts to be detected are extremely small—individual tests could require weeks and entire sample collections many months to complete. Some of the facilities required are highly specialized (one is deep underground to eliminate as much background interference as possible) and scheduling time on them will be a logistical challenge. A few of the methods used to measure trace amounts of some substances have also fallen out of practice as several of the isotopes themselves have faded from the environment after Chernobyl or the cessation of atmospheric nuclear weapons testing. Old techniques will have to be re-learned and some adapted to analyzing seawater or prepared biological samples.

That is not to say the scientists feel they have the luxury of time in which to carry out their work. There is still a sense of urgency that this work needs to get done as soon as possible. Plans are already underway for submitting results analysis to the appropriate journals (a rough draft showing preliminary data is already circulating around the ship) and for a meeting of collaborating team members later this winter.

It’s often difficult to balance between care and haste, but it is possible. And with the attention to detail that this group has already shown it has, I have few doubts they’ll succeed.

There is one other member of this team that has not appeared much in these updates, but without whom we would have been left standing at the dock (literally): the crew of the R/V Ka’imikai-O-Kanaloa. This ship has been a professional, smooth-running base from which to work these past two weeks and the crew bent over backwards to cross half the Pacific at a moment’s notice to make this trip possible. They are: Capt. Clary Gutzeit, Chief Mate John Gall, Second Mate Gary Ramos, Able Seaman George Longshore, Able Seaman Mike Hodge, Able Seaman Rick Hawks, Chief Engineer Robert Tombari, First Assistant Engineer John Carlin, Second Assistant Engineer Dirk Johanson, Third Assistant Engineer John Phillips, Oiler Omar Sherrer, Chief Steward John Grabenhorst, and Assistant Steward Robert Alvarez. In addition, we had two technicians from the University of Hawaii’s Ocean Technology Group who worked around the clock regardless of weather to make sure we were able to get the samples we needed. They are Justin Smith and Paul Balch. To the entire group, thank you and have a safe trip home.