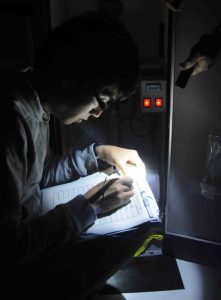 By flashlight on the upper deck, Hiroomi Miyamoto from Tokyo University pours through the Japanese version of the aerosol sampler operating instructions to determine why a sampler on board would not start. (Photo by Ken Kostel, Woods Hole Oceanographic Institution)

Today was a test day, starting with the obligatory one long bell that signals all hands to muster at their emergency stations. For us in the science crew, that means we grab our life vests and survival suits and head to the top deck to be counted.

After that, we began preparing for a dry run (if there is such a thing on the open ocean) of all our sampling equipment and procedures. First in the water was the bongo nets. These small, hoop-shaped nets will collect zooplankton as small as 300 microns—one step up from the base of the marine food chain.

Next was the rosette sampler, the iconic assemblage of 24 sample bottles that is a mainstay of oceanography. The rosette frame also holds instruments to measure salinity, temperature, depth, chlorophyll, oxygen, turbidity, and light penetration from the surface that will help us generate a picture of how waters from the east-flowing Kurashio current is mixing with its colder cousin, the Oyashio (more about these two in future posts).

Last in the water as the rain started falling was the big Methot net, a two-meter-by-two-meter frame with a long, pyramid-shaped net that we towed down to a depth of 200 meters. It will give us an idea of the composition and health of macro plankton (new Scrabble word: nekton), including small shrimp and fish. Hannes Baumann and Jennifer George from SUNY Stony Brook together with Jun Nishikawa and Hiroomi Miyamoto from Tokyo University will be getting wet hauling in and sorting those samples over the next two weeks. 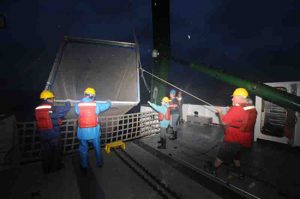 The testing even extended to documenting and reporting, as I discovered that salt spray on a lens does not come off with a wipe from a similarly salty t-shirt (it just smears more) and that the little E in my camera’s display means the memory card is not recording and needs to be reformatted. Good to know—and a good thing there will be 34 more opportunities to re-create the dozens of photos that were lost.

It was also a day of very real work, as several other sampling regimes are already well under way. Last night, for example, we began our first aerosol sampling. There was a tense moment when the instrument wouldn’t start. There’s no service number we can call out here, so Jun and Hiroomi poured through the Japanese operating instructions on the upper deck by flashlight. Fortunately, it wasn’t serious—a light switch that was turned off also controls the outlet it’s connected to.

Jarvis Caffrey, a first-year graduate student in nuclear engineering at Oregon State University is on board to monitor radiation levels in the water and air. He’s running a sodium iodide detector—an instrument that is looking for signs of radiation in the seawater around us. He’s also taking swab samples on the ship’s rails periodically to look for signs of airborne radiation. So far he hasn’t found anything out of the ordinary, and his radiation alarm has remained blissfully quiet.

Tomorrow the fun begins—and the real work. We should be on our first station at around 7:00 p.m. local time. We’ve split the science crew into two, 12-hour shifts so half of us are starting to think about re-setting their internal clocks. There is, however, only one writer and photographer to cover round-the-clock operations. Fortunately, there’s an espresso machine in the wet lab. More about that later.