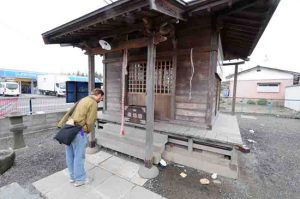 Ken Buesseler pays his respects in front of Namiwake Jinja. The shrine was originally built on land that was spared during the Jogan tsunami of 869 A.D. Namiwake roughly translates as “split wave.” (Photo by Ken Kostel, Woods Hole Oceanographic Institution)

But this is all about something else, as well. Something much bigger. We might be out here to do basic oceanography, but we are also here on the heels of an unprecedented geophysical event that has had massive human cost.

So Ken Buesseler and I took a shinkansen (bullet train) up to Sendai about 200 miles north of Tokyo to see for ourselves what remains the physical effects of March 11. With a population of one million it is the largest city in the Tohoku region that was most heavily affected by the magnitude 9 earthquake and tsunami. The epicenter of the quake was in the seafloor just 80 miles to the east of Sendai.

At first, I was hard-pressed to find any sign that even a small tremor had occurred. Having been to Kobe immediately after the 1995 earthquake, I knew to look for blue tarps on rooftops (traditional Japanese homes have heavy roof tiles that often shake loose and slide off during earthquakes) and cracks in walls, particularly in the corners of windows. But the other things that were common in Kobe—pancaked buildings, buckled streets, large areas of burned houses—were not visible.

We took a cab to a Shinto shrine I’d read about in the southeast part of the city. Namiwake Jinja was first built in the aftermath of the Jogan tsunami of 869 A.D. because the ground it now sits on was spared inundation. This time, as well, the tiny shrine building and the immediate neighborhood were largely unscathed. That’s fortunate because, in addition to the community center next door and the many homes nearby, the area is also home to a large helicopter for the Japan Self-Defense Force from which relief efforts continue to be based.

Our cab driver, Mr. Sasaki, is from Sendai, but had no idea the shrine even existed. He thanked us for telling him about it and showed us how to pay our respects in the traditional way: two claps, two bows, one clap, and a ring of the bell.

Ken and I had originally planned to then make our way to the airport and walk the half mile or so to the ocean before catching a bus back to the Sendai train station. But then Mr. Sasaki said he could take us someplace where we could see the effect of a 15-meter tsunami—a “ghost town” he called it. 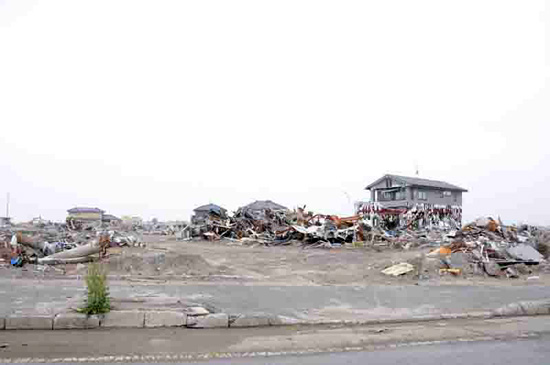 A few of the homes left standing in the town of Nattori near Sendai, Japan (Photo by Ken Kostel, Woods Hole Oceanographic Institution)

From the highway, we could begin to get a sense for the nature of the destruction. Wide swaths of homes were stripped down to the foundations and the rubble strewn about in between. Boats and cars lay in jumbled heaps. Dead trees, poisoned by salt water, stood between untended and unusable rice paddies. But that was only on the left side of the car. The highway is built on a raised roadbed, so it acted like a long dike. Except for a few places where water surged through underpasses, the homes and fields on the right side were largely unscathed. In a way it was reminiscent of the way a tornado can rip through a town and leave one street unscathed while just a block away looks as if a buzz saw passed through.

We got off the highway at a town called Nattori—or rather we got off where Nattori used to be. Only a few houses still stand where there was obviously once a thriving little community. Work crews are already hard at work removing debris, but standing in the middle of an open and jagged horizon, it was hard to believe they could ever put such utter devastation back in order. People may want to move back there because that’s what many people seem to do when their homes have been destroyed. Rebuild. But nothing will grow there for years. Rebuilding to something resembling what Nattori was will take even longer. And there will always be the memory of that day the ocean rose up and took the land.

We got out in front of a Buddhist temple and walked around a bit, but didn’t stay long. The few houses remaining were split open and spilling their contents into the yard or the street. A few lone items were lined up in front of one as if asking: “Whose are these?” But who will come by to claim them?

We got back in the cab and drove to the airport in silence. Along the way we passed a woman squatting in front of the remains of her house, carefully picking through the mud in what was probably once her garden with a tiny hand trowel.