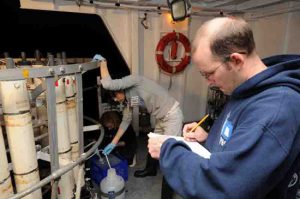 With all the samples being gathered with different handling requirements, every rosette requires a “bottle cop” to ensure that the correct amounts are put in the correct containers. Here, Steve Jayne acts as bottle cop while Kamila Stastna (left) and Sachiko Yoshida tap the correct bottles from different depths. (Photo by Ken Kostel, Woods Hole Oceanographic Institution)

Today is World Ocean Day. Sort of snuck up on me because the ship sort of exists outside of time and I’m not really looking at my calendar except to label my blog posts. Hard to imagine a more fitting place to spend the day.

We now have six teams working 12:00 to 12:00 with a few of our most experienced ocean-going scientists and technicians working slightly offset shifts so that they overlap with both groups. There are three sets of teams, as I may have mentioned before: physical, chemical, and biological. Each has their own responsibilities, but there is quite a bit of overlap, so it isn’t uncommon to see one of the biologists helping out on the CTD deck, for example.

In much the same way that our operations are coordinated and overlapping, the ocean’s physical, chemical, and biological systems are intertwined, as well. Oceanographers look at the chemistry of the water and examine chemical tracers (including radiation) to understand the physical processes governing the movement of water between ocean basins or between ocean and atmosphere. They look at the physical processes beneath the surface to help understand more about the marine organisms that can move thousands of miles each year or that stay in one place all their lives. And the state of those same living things can tell us about the water they live in or that they’ve recently passed through. Just a generation ago, it would have been unheard of to organize a physical oceanography cruise and invite a biologist along, or visa versa. These days, it would be rare not to.

The signs of radiation that we’re looking for are, we expect, going to be extremely slight. In fact, at the moment we’re receiving a dose of radition that is noticeably lower than the one we were detecting on shore and indoors, and almost certainly far lower than what we experienced on the flight to Tokyo. We’re taking samples of water, air, and biota (mainly the lowest levels of the food chain) to test for a suite of more than a dozen different radionuclides. These natural and man-made radioactive elements include isotopes of potassium, uranium, and thorium that are always present in sea water as well as the telltale fingerprint of releases from Fukushima and Cold War nuclear weapons testing that show up in cesium-134 and -137 and the short-lived isotopes of iodine.

Many of the samples we’re taking will not be analyzed onboard. In fact, the refrain here has been that we will leave the ship with very little data. What we will have instead is a wealth of samples that we are pre-processing and packaging to send to labs all over the world with specific expertise in studying one isotope or another. 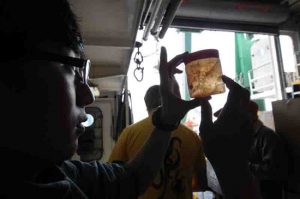 Tokyo Univ. researchers will eventually analyze ten percent of every biological sample for its species content; the rest will be freeze-dried, ground, and measured for radioactivity. Hiroomi Miyamoto holds his ten percent of a recent sample. (Photo by Ken Kostel, Woods Hole Oceanographic Institution)

We’re getting a better idea of what’s going on in the ocean beneath us with every CTD cast and with the return of every net. Steve Jayne knows the Kuroshio current as well as almost anyone and he’s looking at the plots of salinity, temperature, and oxygen together with water velocity that comes off the ship’s acoustic Doppler current profiler to build a more detailed picture of how that current is mixing and mingling with large masses of water north and south of us as well as with water from the coast of Japan.

One of those fine details that make the Kuroshio so interesting, a surprisingly strong 4.5-knot stream within the main current, has been holding us back for the past day or so. We’re out of it now, but we still might have to trim a few stations off this and the next leg in order to make sure we have plenty of time to get samples from the critical near-shore locations.

That is yet another hallmark oft-repeated truism in oceanography: you never go to sea with a plan that is either inflexible or lacking options. We’ve built in both, but will still have to take what the ocean gives us.