Here on the VERTIGO voyage, at a site north-east of Japan, we are studying the mechanisms that control the export of particles to depth. A key component of VERTIGO is to investigate the relationship between biological activity in the surface ocean – a factory that produces sinking particles – and what proportion of this material sinks exporting carbon into the deep ocean. So the first task is to determine how productive the upper ocean is – how much carbon are the phytoplankton fixing – as this is one of the main determinants of the magnitude of export flux. But of course it’s not the whole story as phytoplankton in these waters range from tiny (< 1 µm) Synechococcus to large spiny diatoms that can be seen with the naked eye. There are also algal groups whose skeletons are constructed of silica (glass-houses for diatoms and silicoflagellates) or calcite (chalky plates on coccolithophores). These mineral skeletons have a higher density that seawater and therefore provide much needed weight (ballast) to help clumps of surface particles (aggregates) to exit the upper ocean, enter the Twilight Zone and plummet to depth. 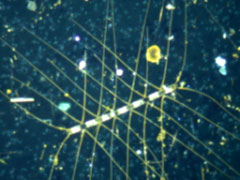 Photomicrographs of a large diatom from the VERTIGO site. (Courtesy of Mary Silver) 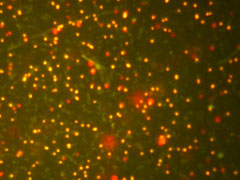 Photomicrographs of tiny cyanobacteria from the VERTIGO site. (Courtesy of Mary Silver) 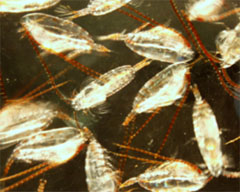 Photomicrograph of a cluster of Neocalanus plumchrus – one of the dominant zooplankton in net tows at our site. (Courtesy of Stephanie Wilson)

Not all of these different phytoplankton species will end up in the deep ocean. Small cells sink more slowly than large cells. Also it’s a jungle down there – as these microscopic plants must run the gauntlet of a wide range of critters who want to eat them. These grazers include large copepods such as Neocalanus plumchrus (15-20 mm in length) which will transform a diet of algal particles into fast sinking faecal pellets. However some (often larger) phytoplankton will sink to depth unscathed by grazing. So just because a particular phytoplankton group is numerous in surface waters doesn’t necessarily mean it will also be a player in particle export at depths between 150 and 500 m where the VERTIGO sediment traps are deployed.

Several groups on board are defining the composition of the phytoplankton community (using microscopes and testing for a wide range of algal pigments), measuring how phytoplankton biomass and productivity are partitioned between size classes (size-fractionated primary production), and recording the concentrations of ballasting materials such as calcite and silica. Together, these data provide information on what algal groups fix the majority of the carbon in the upper ocean, whether the predominant carbon fixers also provide ballast via their chalky or glassy skeletons, and which phytoplankton can exit the surface ocean directly without being grazed. Already we have evidence that some algal groups may be disproportionately important in driving the export flux of carbon (originally fixed photosynthetically in the surface ocean) to depth. It appears that some phytoplankton just don’t get the chance to vacation at depth where it is dark and a bug can think.