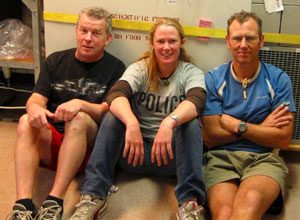 New Zealanders Phil Boyd, Caroline Walker, and Mark Gall in front of one of their oxygen measurement devices. (Photo by Carl Lamborg)

In our earlier note “What lies below?” we pointed out that the strong near surface stratification in this corner of the North Pacific is a key aspect of the environmental conditions that influence phytoplankton production and the overall structure of the regional ocean ecosystem.

Stratification is important because the depth of the surface mixed layer determines the average amount of light that phytoplankton experience as they swirl about. A shallow mixed layer of 10-15 meters, as we have here, offers phytoplankton lots of light despite the generally cloudy skies which we have had. But the good times that this shallow mixing offers don’t last forever – phytoplankton production and export of sinking particles depletes the nutrients in the mixed layer and the plants eventually run out of nourishment. Based on previous work in this region, the nutrient rich waters (more than 20 and 40 umol/kg of nitrate and silicate respectively) brought to the surface by deep mixing in winter are reduced to 1 or 2 umol/kg by mid-summer. These levels are probably still to be the proximal limit to growth, but they may affect the mix of species of phytoplankton (for example, high nitrate and silicate favour diatoms over other phytoplankton), and in some years depletion to limiting conditions may occur. We are collecting nutrient samples for analysis on-shore later. 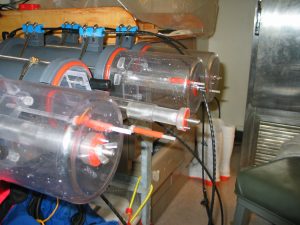 Oxygen respiration chambers – the clear ‘dome’ closes at depth to encapsulate a small volume of water, in which measurements of oxygen are made with an automated and internally logged sensor.(Photo by Mark Gall)

Below this surface stratification – that is below the warm fresh surface layer of the top 10-15m, and below the cold ‘temperature-minimum’ waters left from the preceding winter (see the profile of water column properties obtained from the CTD in the earlier note “What lies below?”), the waters of the North Pacific are very old. Indeed, below the highly-productive surface waters with their annual renewal of nutrients, lie waters that have not seen the atmosphere in close to 1000 years ! The North Pacific is far from regions of deep water formation in the Southern Ocean and North Atlantic, and little deep waters forms locally. This means that these waters have traveled from far away. During their passage the ‘rain’ of sinking particles has enriched their nutrient levels, but also depleted their oxygen (the % of saturation falls below to less than 20% of its surface air-saturated level at just 200m depth! This is old, stagnant ocean, below us!

The consumption of oxygen by sinking particles and by living organisms is under intensive study by VERTIGO team members Phil Boyd, Caroline Walker, and Mark Gall from New Zealand’s National Institute of Water and Atmospheric research.

They are undertaking in-situ oxygen consumption measurements using chambers which are hung below a drifting float and measure decreases in oxygen within the chamber by bacteria as they oxidize organic matter. It is important to do this work in-situ because bacterial metabolism is known to decrease with pressure below the sea-surface, and because this is the best way to work on particles and organisms without disturbing them. The chambers can also be used onboard the ship to examine respiration rates of zooplankton placed within them. They are also attempting to measure oxygen consumption by sinking particles using a sensor embedded in a trap.

Yes, the deep sea needs oxygen and it needs food. Both may become harder and harder to obtain – simulations of greenhouse warming suggest increasing stratification of the global ocean with less oxygen delivery from the surface, and less nutrient return to the surface to fuel production and its export to the deep sea. VERTIGO is providing information on the current state of affairs against which future changes can be evaluated, and via which simulations of the future can be improved.